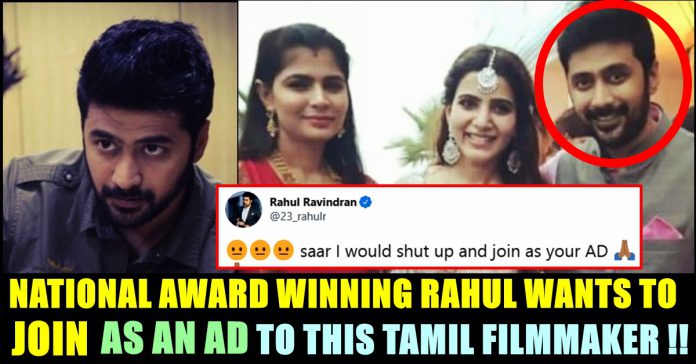 Rahul Ravindran who worked as director in films like Chi La Slow, Manmudhudu-2, has expressed his wish of becoming an assistant director to a two films old Tamil filmmaker. He said it to the Tamil director himself while conducting a chat session with his Twitter followers. It is notable that Rahul received a national award for his debut film in the original screenplay category.

It all started Director C.S Amudhan who is known for directing the only spoof film in Tamil cinema asked “if Rajamouli & Anurag both wanted to join as your AD but you could only pick one… who would you choose & why? ” in a humorous way. Rajamouli is known for directing the magnum opus of Indian cinema, Bahubali and Anurag is considered as India’s best filmmaker. Amudhan’s sarcastic question made many of the social media users to laugh, including Rahul.

Check out his question here :

@23_rahulr if Rajamouli & Anurag both wanted to join as your AD but you could only pick one… who would you choose & why? #AskRahul

In a way of giving Amudhan a reply, Rahul said that he will join as assistant director to the “Tamizhpadam” maker himself. “saar I would shut up and join as your AD” Rahul said in his reply tweet.

That didn’t end there. Their conversation continued in a hilarious way with Vadivelu memes and self trolls. Check it out below :

This conversation from the duo left their followers in splits. Rahul Ravindran is married to singer Chinmayi, whom he began dating in June 2013. He is currently working on his next project and is expected to make the official announcement soon. C.S Amudhan, on the work front, is expected to release the 3rd part of his spoof movie Tamizh Padam by having Shiva in the lead.

Comment your views on this hilarious conversation of this duo !!