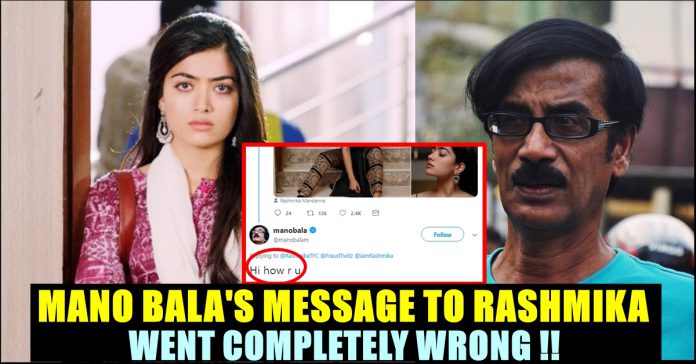 Kannada actress Rashmika Mandanna got her break in Telugu with director Parasuram’s Geetha Govindam, which turned out to be a superhit venture. The actress shared screen space with happening Tollywood star Vijay Deverakonda in the film. Rashmika is gearing up for the release of Dear Comrade.

Fans of the actress expected Rashmika to be the second heroine of Thalapathy63 which turned out to be a rumour. Dejected fans expressed it in social media by tagging director Atlee. Last year, she also became one of the highest paid heroines in Sandalwood. The makers had shelled out Rs 64 lakh for her Kannada film Pogaru. It looks like Rashmika is all set to spread her wings in other languages as well.

According to reports, she is said to be demanding Rs 60 to 80 lakh now, due to her growing popularity. This move has raised several eyebrows, given that she still has miles to go before she proves herself as a bankable star in Tollywood. Now one of her photoshoot pictures are going viral in social media due to her fans who are sharing it in the fan pages of Rashmika. Now to our surprise, Director, Producer and supporting actor Mano Bala tried to contact the actress which went completely wrong.

Assuming Rashmika’s fan account as her original ID, Manobala sent her a message saying “Hi how r u”

Hi how r u

The actress who saw this comment of Mano bala, immediately responded with a greeting which went unnoticed by the latter.

Hi @manobalam sir. I am fine thankyou..How are you sir?..😁

However, this attempt of Mano Bala made many of the twitter users laugh their heart out. Many fans tried to help the 65 year old comedian by showing him the official twiiter ID of the actress. Check out some of the comments here :

With such golden opportunities in her career, she is all set to enter the Rs 1-crore club in a couple of years.

A Group Of People Criticized Chief Minister MK Stalin For Not Doing This On “Diwali” Day !!

Controversial movie reviewer Blue Satta Maaran provided two reviews for 15 long minutes for "Ponniyin Selvan". Initially, he made a review in a complete...

A number of cases emerged regarding people contracting HIV after tattoos. Authorities warned public about cheap tattoo parlours after such cases reported in Varanasi...