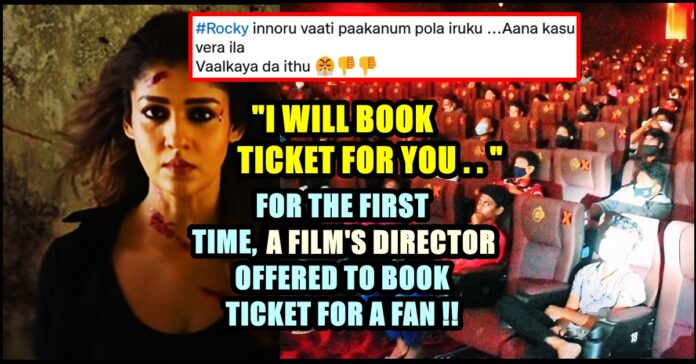 Debut director Arun Matheshwaran who has been committed to direct actor Dhanush’s one of next movies, offered to book ticket for a fan who ranted in Twitter about not having money to watch “Rocky” again in theatre. The filmmaker who earlier responded to a fan’s tweet about the first day first show of “Rocky” having only two members in theatre, asked the cinema fan to mention the theatre name to book ticket. However, the fan decided not to get his ticket booked for “Rocky” by its director Arun.

“Rocky”, one of the most expected films among the film buffs, released on Thursday in theatres across the state. The film which stars Vasanth Ravi and Bharathi Raja in the lead roles, released under the banner of “Rowdy Pictures” of Nayanthara and Vignesh Shivan. The film is receiving rave reviews from the critics and the movie buffs with number of foot falls increasing day by day.

The plot of “Rocky” revolves around the vengeance that takes place between the protagonist named “Rocky” and his boss “Mani Maaran” with whom the former’s father worked as a henchman. The “A” certified revenge drama shows how extreme they both go to express their vengeance. With many praising “Rocky” for the technical aspects of the film, a number of fans “liked” the different kind of experience the film gave.

A fan twitter, on Saturday, came up with a tweet ranting that he feels like watching “Rocky” for the second time but didn’t have enough money to do it. “#Rocky innoru vaati paakanum pola iruku …Aana kasu vera ila Vaalkaya da ithu” read his tweet.

The filmmaker who is pretty much active sharing the reviews his debut movie is getting, got too see the tweet and decided to respond. He asked fan to name the theatre in which he wants to watch the film and offered to book ticket in it. “Endha Theater nu sollunga ticket book panni tharen” Arun said by adding hug emoji.

The twitter user who got overwhelmed by the response he received from the maker himself, decided not to get his ticket booked by Arun.

Days ago, a fan uploaded a video in his twitter timeline and said that there’s only two people watching the film’s FDFS. Without reacting much, Arun Matheshwaran, the filmmaker, simply suggested the follower to watch the film imagining that he is watching the preview in big screen. “Periya screen la private screening nu nenachuttu paarunga” the filmmaker’s reply read.

Tik Tok’s First Ever Emotional Statement Regarding The Ban !!

Indian government has banned 59 chinese mobile applications, including top social media platforms such as Tik Tok, Helo and We Chat. to combat the...

Tollywood Star, Pawan Kalyan is all in praise for Tamil Nadu Chief Minister M. K. Stalin. He has posted a tweet on his Twitter...

Sanjay Manjrekar Indirectly Said India Will Win The World Cup !! Getting Thrashed For This Reason !!

A week before the start of the ICC Cricket World Cup 2019, the World Cup captains met in London at a traditional pre-tournament press...