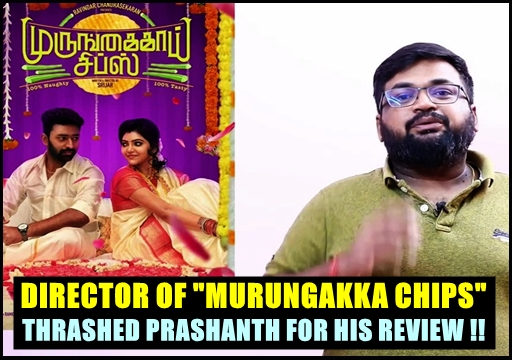 Shanthanu-Athulya starring “Murungakka Chips” released across the theatres in Tamil nadu on 10th Of December. The film which was directed by Srijar, revolves around the first night of a newly married couple played by Shanthanu and Athulya. Along with the lead actors, the film also features K.Bhagyaraj, Urvashi, Munishkanth, Yogi Babu, Mano bala and Mayilsamy. Producer Ravinder Chandrasekhar who is popularly known as “Fat man”, produced the film which received “A” certificate from the censor.

As soon as the film got released, it received average reviews from audience and from the critics. Reviewer Prashanth Rangaswamy who enjoys 7 lakh plus subscribers for his youtube channel “Tamil cinema review”, trolled the film through his 8 minute review, saying that the two and half hours film gave him headache and body pain.

The reviewer criticized the filmmaker throughout his review and said that it is a downfall for Shanthanu who was going well with the projects such as “Master”, “Thangam”. He also questioned Athulya for choosing to act in the movie and advised her saying that money can be earned through various ways but choosing good projects will help her.

On seeing his review, director Srijar who seemingly got displeased, came up wit a long facebook post, thrashing the movie reviewer. Terming Prashanth as a paid reviewer, Srijar said that Prashanth reviewed the film as if he is the saviour of this society and filmmakers like him intend to ruin the society.

Here’s the review of Prashanth :

“The whole country knows that you have another name “Paid reviewer” Prashanth. You will review as per your wish if the producer decides not to pay you money. “Murungakkai Chips” is a film that is being loved by majority number of people. It is being celebrated by the youngsters widely. You have confused the audience with your review” Srijar fumed.

“We are promoting the film from the start, saying that one shouldn’t research but enjoy. After a long time, women are laughing for adult jokes in theatres. You also abused my producer Ravinder Chandrasekar in club house. My producer is a cinema lover because of whom cinema is still surviving” Srijar said by adding that Prashanth’s review is filled with vengeance.

“I am working in cinema for the past 20 years. I have read a lot and have much knowledge about screenplay writing. Don’t you ever underestimate me” Srijar said and denoted that Prashanth is ruining the film industry which is feeding him. “The rice you are eating from the money you earned from this review is my producer’s alms to you. you must feel ashamed of eating that food” the filmmaker said.

Srijar also said to Prashanth that filmmakers, films of whom were badly reviewed by him, went to the next level and questioned his current state. “I have started the works for my next film. My producer also started working on producing his next film. You think of whom you are going to beg next” Srijar ended his post which is going viral among the online users.