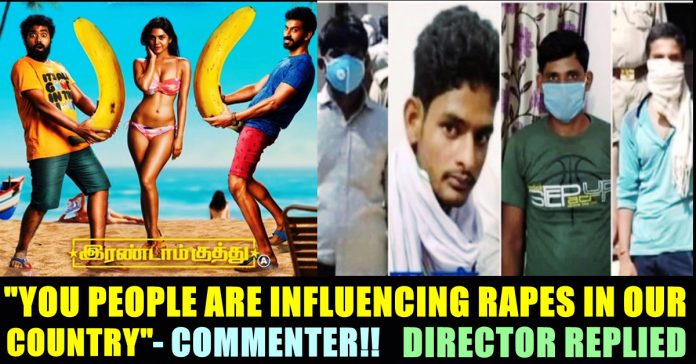 The first look poster received fair amount of criticism from the online cinema fans. Some of them abused the filmmaker for making a film with such content. An Internet user went one step ahead and linked the poster with the crime that took place in Uttar Pradesh. He said that these films are influencing men to involve in rapes in out country.

In addition with Santhosh and Danny, the film has Ravi Mariyaa, Chams, Shalu Shamu, and Singam Puli in the supporting roles. The filmmaker made it clear that the film is not a sequel of “Iruttu Arayil Murattu Kuthu” but lies on the same genre. He also said that “Irandam Kuthu” will see a sequel in future. Now, on seeing the harsh criticism, the film’s first look poster is receiving, Santhosh has appeared in an interview and replied to such comments directly.

To a comment which said that the poster will make women feel uncomfortable, the filmmaker replied by saying “Let ladies say it if they feel disgusting. Let us stop talking on behalf of women. They have the voice and strength, let them talk for themselves.” said Santhosh. “Please come and watch the film only if you feel you are matured enough” he added.

When an online user asked how his mother reacted to the first look poster, Santhosh said that the question raised in his own house itself. “When my family members asked me why I am making adult films, I replied to them by saying I never made a film on Murder, Rape, Drug addiction or corruption. None of the crimes that I mentioned took place in my film.” replied Santhosh. “When I said it to my family members, it made sense” he added.

To an individual who linked the film’s content with UP rape case, Santhosh questioned about the rapes that took place before his film’s release. “No rape cases registered in India before Hara Hara Mahadevaki’s releae ??” he asked. “There were several films preached on not to drive after consuming alcohol. People stopped doing it ?? People should self realize on what to do and what not to. I can’t educate each and every individual. I am an entertainer” the filmmaker said.

As we all know, Sathyam Cinemas is one of the most popular theatre in the city and it acts as the first preference for...

For Not Capturing The Incident, Drivers Blaming That Woman IT Employee !! Watch !!

A taxi driver's selfie video before he ended his life accusing police of harassing him and citing it as the reason for his suicide...