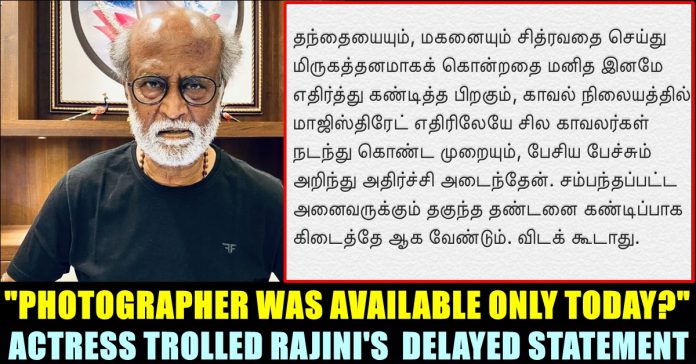 After nearly 10 days of the incident happened, Super star Rajinikanth reacted to the Sathankulam lockup murder case by posting a tweet. Recently, a news surfaced saying that Rajinikanth personally called the family members of Jayaraj and Bennix and consoled them but it turned out as a mere rumour. Several people from various political parties and supporters of them criticized the actor for not opening about the issue, despite of making a humongous career out of Tamil film industry.

Now, after reading about the behaviour of Police officers in front of magistrates, the actor posted a tweet condemning the act of the Sathankulam cops. A latest report that emerged, has said that the magistrate appointed by the Madras high court to probe the alleged custodial deaths of a father and son duo in Sathankulam, has written to the court saying that the officers who are involved in the case, had destroyed evidence, did not cooperate in the investigation, and had tried to intimidate the judicial team.

The judicial team reached the Sathankumlam station around 12.45 PM on Sunday and two senior police officers ASP Kumar and DSP Prathapan made no efforts to acknowledge the presence of the judicial team. Instead, Kumar “flexed his muscles and biceps” said the complaint. Magistrate Bharathi Dasan, in his note to High court, confirmed the physical torture Jayaraj and Bennix went through by the police officers.

After the Judicial system taken the photos and videos of the station premises, Bharathi dasan said that they called constable Maharajan for interrogation at first. He said that the constable was not “forthcoming” and at first he “appeared scared”. But later at one point, Maharajan came close to the magistrate, and reportedly said “Unnala onnum Pudungamudyathu” in Tamil.

Rajinikanth who became aware of this, posted a tweet today saying that the behaviour of the Police officers in front of Magistrate and the way they talked to him shocked him. “Those who are involved in this must get the punishment. We should not leave this. We must not leave this” read the tweet of him.

This tweet from the Superstar actor made an impact in the trending list of twitter. A set of people criticized him for the delayed reaction as well. Director C.S Amudhan who is known for making films such as Tamizh Padam 1 and 2, posted a tweet mocking the delayed tweet of the Superstar actor. Amudhan, in his tweet said that he got truly distressed & shocked that a serial killer called Auto Shankar has been killing many people in the city.

Serial killer Auto Shankar committed suicide in the year 1995. By mentioning about the 25 year old case, Amudhan indirectly trolled Rajinikanth’s delayed response for the act of the Police officers in Sathankulam.

I am truly distressed & shocked that a serial killer called Auto Shankar has been killing many people in the city.

Actress Kasthuri posted a tweet questioning “Maybe the photographer was available only today ?”

Maybe the photographer was available only today ?

It is notable that Kasthuri acted in C.S Amudhan both the movies. However, fans of the actor are involved in trending the hashtag “சத்தியமா விடவே கூடாது” by condemning the issue. Comment your views on this tweet of the actor !!