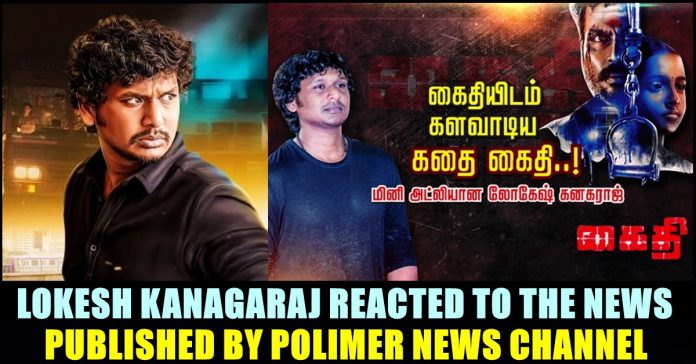 Emerging filmmaker Lokesh Kanagaraj reacted to the controversy that emerged against him regarding the story of his blockbuster film “Kaithi”. He who decided not to get himself involved directly in this issue, retweeted the press note released by Dream warrior pictures and expressed his stance in the “story theft” issue. The filmmaker is currently busy working on Kamal Haasan’s “Vikram” which is going to the floors anytime soon.

The press note of Dream warrior pictures said that the production team can deny the accusations that are being quoted in the media portals completely and prove it legally. The production house of S.R Prabhu, requested media channels not top defame people who are associated with the project without knowing about the results of the case’s investigation.

The most popular Polimer news portal came up with a report on the evening of Saturday accusing director Lokesh kanagaraj of stealing the story of his blockbuster film “Kaithi” from a prisoner. They termed the filmmaker as “Mini” Atlee in their title and blatantly said that he stole the story of “Kaithi” from a prisoner. Producer S.R Prabhu of Dream Warrior Pictures who produced the film, immediately came up with a tweet defending his director. He who seemingly got frustrated, said that it is very cheap to degrade a filmmaker without knowing about the full details of a case and asked the news channel to advice the admin.

The report of Polimer had said that the story of “Kaithi” was written by a prisoner in “Puzhal” jail. It said that Rs. 4 crore was demanded from producer S.R Prabhu as a penalty for buying the story from the prisoner by paying him Rs.15,000 as advance and making the entire film which collected Rs.105 crores during its theatrical run.

The story of “Kaithi” belongs to a Kerala based prisoner named “Rajeev” who spent his sentence in the “Puzhal” jail regarding a murder case, says the report. He got released from the jail in the year 2007 and met producer S.R Rajan with his friend and narrated the story to him. The producer reportedly paid Rs.15,000 as advance and promised to pay the rest when the story gets made as a film. Rajeev was not informed about anything regarding it after that, said Polimer.

Recently, he watched “Kaithi” when it was played in Television and got shocked to realize that his story was made as a film. He who believed that one part of his story was made as a first half, approached court with the help of a lawyer with the evidences he got. Based on that, Court has ordered to ban producer S.R Prabhu to produce the sequel of the film and also a notice was sent to him to pay Rs. 4 crore as a compensation for making a film with Rajeev’s story without his permission.

Now, reacting to the news, the official press note of Kaithi’s production house said that they became aware of the ban only through the news channels and couldn’t talk about it without knowing the full details about it. “Meanwhile, we assure that we can deny the accusations quoted in the media channels against us and prove it legally. Further we request few media channels not to defame people who are associated with the project without knowing the results of the investigation and to maintain dignity” Dream warrior pictures said.

Director Lokesh Kanagaraj, in a way of reacting to the accusations made against him, retweeted the press note of Dream warrior Pictures and expressed his stance.