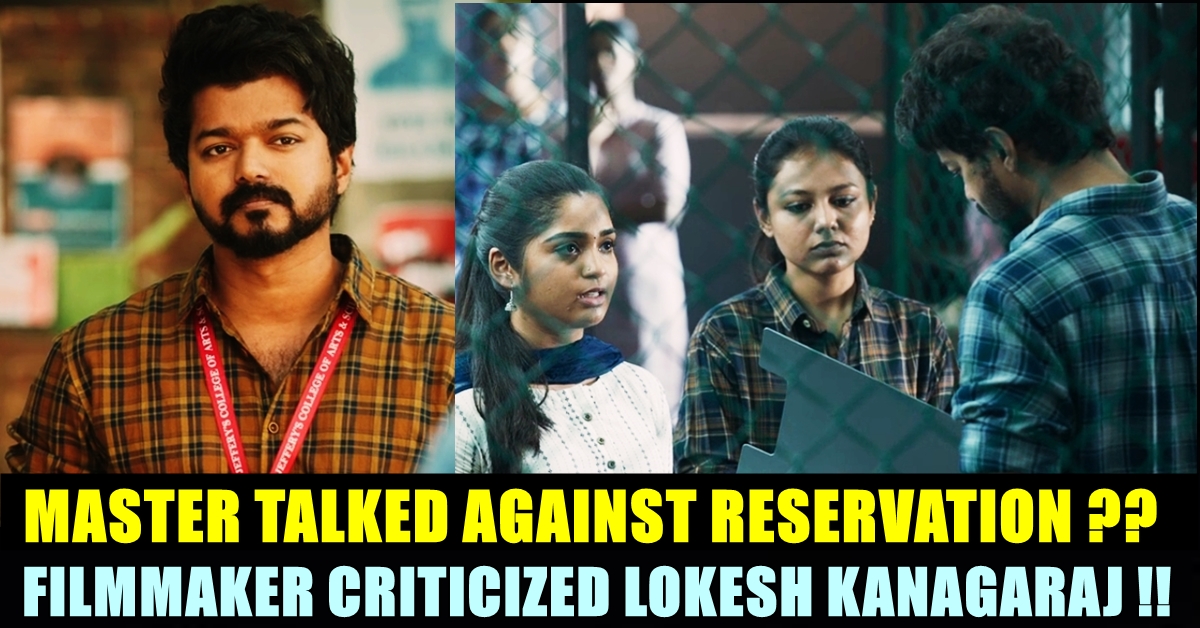 Director C.S Amudhan who is known for directing the only parody film of Tamil film industry, came up with a tweet criticizing Lokesh Kanagaraj after watching “Master”. The filmmaker said that the film lacked political correctness and criticized the “Vikram” maker for the flaws he made in Master’s caste and feminism angle. Without mentioning the filmmaker’s name and tagging his official twitter account of him, Amudhan added a lyric from the song “Let me tell a kutti story” to confirm that he is talking about “Master” and Lokesh Kanagaraj.

“Master” which showed Vijay as an alcoholic professor, contained Vijay Sethupathi, Arjun Das and Malavika Mohanan as a gangster, henchman and a college professor respectively. Locking horns with John Durairaj played by actor Vijay, Vijay Sethupathi who represented Bhavani, comes as a ruthless killer who uses juveniles as his pawns to establish his criminal enterprise.

After getting released in the theatres ahead of Pongal festival, the film, on 29th of January released on Amazon Prime and reached wider audience who started noticing the minute details of the film which they missed in the big screen. Also read : This One Particular Frame From “Master” Caused Outrage Among Vijay & Ajith Fans !! Now, director C. S Amudhan, after watching the film, came up with a tweet criticizing the three films old young filmmaker Lokesh Kanagaraj.

Amudhan who suggested Lokesh to hire a couple of script supervisors, said that it won’t cost him much while making a film with humongous budgets and Superstar actors. He wanted Lokesh to get his politics right, especially the feminist and caste angles as he is influencing so many minds with his film and concluded his tweet with “Konjam try Pannu maapi”, a lyric from “Let me tell a kutti story” song.

“Can our young filmmakers who get to associate with superstars & are able to get humongous budgets pls get their politics right..especially the feminist & caste angles. A couple of script-supervisors won’t cost you that much. U r influencing so many minds, konjam try pannu maapi!” the filmmaker’s tweet read.

Can our young filmmakers who get to associate with superstars & are able to get humongous budgets pls get their politics right..especially the feminist & caste angles. A couple of script-supervisors won’t cost you that much. U r influencing so many minds, konjam try pannu maapi!

It is believed that Amudhan is mentioning a scene where JD (Vijay) would say that caste and religion should be avoided completely during one’s academic period. Savitha (Gouri Kishen) would say that she had categorized all the students in caste and religion wise and JD would reply saying “That’s not needed. We should avoid it from now itself to prevent it from following us in the future”

Though it was kept in the film with an intention to avoid casteism in our country, in one way, the dialogue also stands against the reservation system which helps many students in improving their educational qualification. Regarding “Feminism”, Amudhan could have mentioned about the character arc of actress Andrea in his tweet.

The most awaited Vijay’s “Master” was supposed to get released during April 2020 and managed to release only ahead of Pongal Festival due to COVID 19. The fans of Tamil cinema celebrated it as the biggest event with extreme happiness as they were going to witness a proper mainstream feature film of a top tier Tamil actor after nearly one long year.

This One Particular Frame From “Master” Caused Outrage Among Vijay & Ajith Fans !!
This Tamil Film Spent Rs.3.5 Crores To Get Nominated In Oscars ??