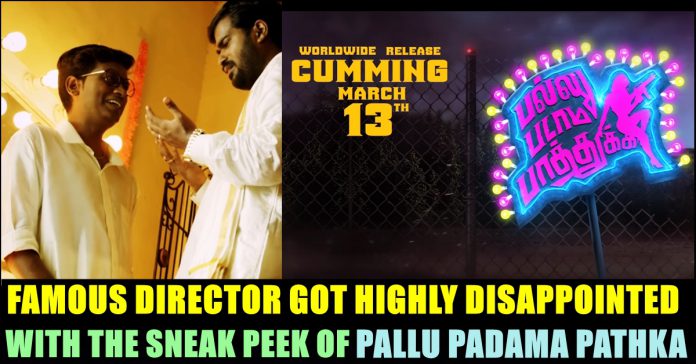 The three minute eleven seconds long sneak peek shows popular video jockey Jagan confronting Vijay Varadharaj, a man who is about to get married. Jagan treats Vijay as his boyfriend who betrayed him by getting married to a girl. The dialogues uttered by Jagan throughout the scene is highly homophobic and biphobic.

Jagen laments to Vijay about how he loved him in the past and questions Vijay on why he betrayed to which Vijay asks “could we love the finger nail just because it helped us during the itch?”

Watch the sneak peek below :

This sneak peek received highly negative response from the users of Twitter. Director C.S Amudhan who seems to have worked with Vijay Varadharaj in the past, expressed his disappointment over the sneak peek. In his tweet, Amudhan said that he had pleasure working with Vijay Varadharaj whom he mentions as one of the brightest young talents.

He also appreciated Vijay Varadharaj for his ability to write his own brand of dark wit. However, his very own opinion about Vijay Varadharaj made the filmmaker to hate the sneak peet it seems. “Vijay Varadraj is one of the brightest young talents I’ve had the pleasure to work with. Have always admired his ability to write ideology in his own brand of dark wit. Which is why this horrifically homophobic sneak-peek is disappointing. I hope better sense prevails.” read the tweet of C.S Amudhan.

Vijay Varadraj is one of the brightest young talents I’ve had the pleasure to work with. Have always admired his ability to write ideology in his own brand of dark wit. Which is why this horrifically homophobic sneak-peek is disappointing. I hope better sense prevails.

The film stars Attakathi fame Dinesh and Sanchita Shetty in the lead roles, with Sha Ra, Jagan and others in the supporting roles. The soundtrack is composed by Balamurali Balu, while cinematography is handled by Ballu. The film is produced by head of Studio Green, K. E. Gnanavel Raja under his banner Blue Ghost Pictures and is scheduled to release on 13 March 2020.

Vijay Varadharaj & co has a separate fan base for their videos in their youtube channel Temple Monkeys which has more than 1 lakh followers. The crew are currently busy in promoting their film among the online platforms. Comment your views on this opinion posted by C.S Amudhan !!

Previous articleVikatan Gave The Lowest Mark For Draupathi In History !! Director Replied
Next articleChennai Man Requested This Actress To Buy Him iPhones To Play PUB-G !!

Anushka Sharma and Virat Kohli is the most happening couple in the country. Both being two of the most important person individually, never missed...