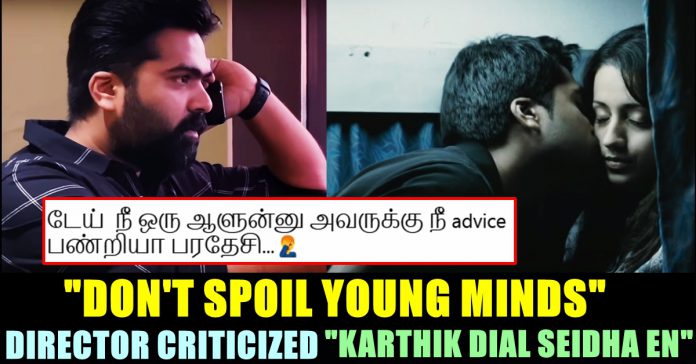 Director of “Draupathy”, Mohan G, a film which created huge controversy during its release time, has expressed his disappointment over ace filmmaker Gautham Vasudev Menon’s recent short film “Karthik Dial Seidha Enn”. The team “Vinnai Thandi Varuvaya” which consists biggest names of Kollywood such as A.R Rahman, Gautham Vasudev Menon, Trisha and Simbu came up with a 12 minute long short film to address the current pandemic and to give a hint about the sequel of the 2010 blockbuster.

The short film which released on Gautham Menon’s official youtube channel “Ondraga Entertainment” is currently trending at number 3 in the video streaming platform right now with more than 6.4 million views. Fans of “Vinnai Thaandi Varuvaya” couldn’t keep themselves calm as they felt nostalgic on seeing this short film in which two lead characters Jessie and Trisha are having a conversation over phone.

Titled as “Karthick Dial Seitha Enn”, the short film focuses on the writer’s block faced by Karthick, a filmmaker by profession. To help himself to write his script with a peace of mind, Karthick calls Jessie, a mother of two children and seeks her help. He asks her to love him like she did before which helped him to write his debut film “Jessie”. She who hesitates initially goes on to talk her heart out to her ex-boyfriend.

She confesses to Karthik that she fell in love with her now-husband Roy after watching “Mowna Ragham”and had babies with him four years later. Jessie goes on to say that she is very much fond of Karthik and tries to make him understand that she sees him like her third child as she already has two children with Roy. Jessie consoles Karthik who was very much worried of the theatres shut down by motivating him to write something new as there are online platforms such as Amazon, Netflix are emerging.

This short film received very well by the mainstream audience despite of memes and trolls on “Karthik getting babyzoned by Jessie”. Now, Mohan G who is known for making two Tamil films named as “Pazhaya Vannara pettai” and “Draupathi” posted a tweet requesting Gautham menon “Not to spoil young minds”

By tagging the official twitter account of Gautham Vasudev menon, Mohan G said that many young people are following what he shows in his films. “Don’t try to poison their minds.. Jessieroy , I need you at any cost for relieving my depression. As a fan this is my request sir.” his tweet read.

@menongautham sir.. Many youngsters following your movie, style, dialog deliveries, movie making pattern, song grabbing mind, hand kada everything.. Don't try to poison their minds.. Jessieroy , I need you at any cost for relieving my depression. As a fan this is my request sir.

Many people came up with replies trolling and mocking the filmmaker for his stand in “Karthik Dial Seidha En”. “Even if Gautham was wrong, You don’t have to mention it” wrote one of a user where many others abused him for his tweet.

Mohan G’s “Draupathy” became one of most profitable film in 2020 as the film was made of less than Rs. 1 Crore budget. The film reportedly collected more than Rs.14 crores during its theatrical run. However, the film got severely criticized for being a caste based film with content influencing people to glorify their castes.

Comment your views on these tweets of Mohan G and the reactions he is receiving !!