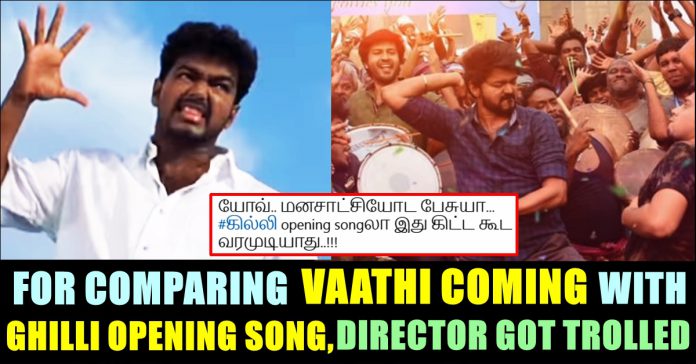 Vijay’s Vaathi Coming released recently in Internet and became a massive hit among the fans of Tamil cinema. Director Rathnakumar’s tweet about the song became a subject of trolling as he compared the song with Vijay’s blockbuster film Ghilli’s opening song. The song which contains lyrics in gibberish is going viral in social media platforms as soon as it got released. Dubbed as “Vaathi Coming”, the song is the first fast number of the film as the first single is a slower one.

“Vaathi Coming” released on Tuesday 5 pm as a lyrical video. Having the images of actor Vijay, the song has music director Anirudh performing in it. The making of the song and the moves of the dancers were also took place in the lyrical video. Interestingly, towards the end, the song had actor Sanjeev, Nagendra Prasad, Srinath, Sriman dancing along with their long time friend Vijay in the song.

To this tweet, many of his followers who couldn’t accept his comparison expressed their thoughts and opinions. Few who didn’t like the song also made their comments. Check out some of their reactions below :

Beat and tune unjustifiable for boxoffice actor like Vijay.
He shelled in to dandanaka that too 2000 beat, but this is 2020.
Still not too late, change the music or music director. Expected something similar to Imman’s annathe…

Watch the opening song of Ghilli below :

Vijay’s Master is slated to release on April month and most of the fans are believing that the film is going to release on the 9th of the fourth month. Having released three looks and two single, the makers are expected to announce the release dates of Teaser, Trailer soon.

The reality show Bigg Boss Tamil is back with the third season, and reportedly, Kamal Haasan will be hosting it yet again. According to...

In an unexpected turn of events, ace actor and founder of "Makkal Needhi Maiam" party Kamal Haasan was defeated in the constituency he contested....