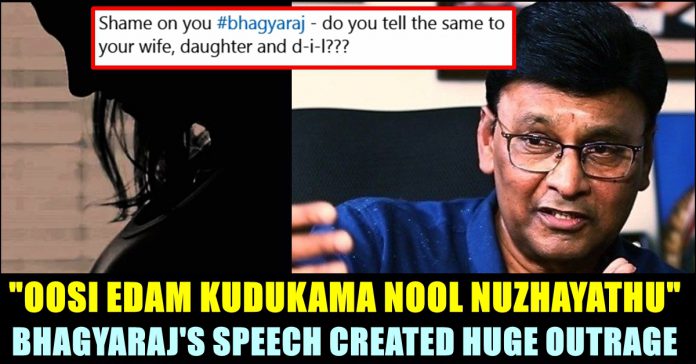 Followed by Radha Ravi and few more senior men from Tamil cinema industry, Director Bhagyaraj is facing severe hatred in social media platforms for his speech in a movie function. Bhagyaraj is known for the movies he acted and director. He has worked in more than 60 films and has directed more than 25 films. He won a Filmfare Best Actor Award for Mundhanai Mudichu.

In the function of “Karuthukkalai Pathivu Sei”, Bhagyaraj made a comment on the sensitive case of Pollachi rape. The Pollachi rape case involves gang members who used to befriend women on social media websites luring them to meet and then forcefully shooting their obscene videos. This incident created massive outrage in the state Tamilnadu where many started protesting in order to get the culprits what they deserve. Apart from the public who are very much angry on the rapists, many celebrities also raised their voice for the victims.

But in his speech, Bhagyaraj said that women has to be safe and precautionary more than boys to prevent the rapes which are taking place in the state. “After the arrival of cell phone, the discipline among women has reduced. Wherever we see, girls are always on their phone talking in husky voice.” said Bhagyaraj who proudly said that he wrote a scene in one of his movies on girls using multiple phones to have relationship with several men.

Further the filmmaker reminded about a debate he participated in where he used the phrase “Oosi edam kudukkama nool nuzhayathu” (Without the cooperation of the needle, a thread can’t enter it) to point out that women too are the reasons behind the rapes.

“Even I said it in the debate in a humorous manner, that is the truth. It is because of the women, a crime takes place. So you (women) have to be careful. It won’t stop if you keep on accusing men” said Bhagyaraj only to get huge applause from the group of men in the hall.

“If a guy makes a mistake, it is not a big deal for him. But If a girl commits a mistake it is a big issue for her.” said Bhagyaraj who firmly said that the Pollachi rape crime occurred not only because of men. “After the advent of cellphones, women are not thinking about their safety. Men are not the only reason for the crime that took place in Pollachi. Women gave them the opportunity” said Bhagyaraj which created massive outrage in social media platforms.

Check out some of the reactions for this speech of Bhagyaraj :

#Bhagyaraj
What..how…why….
How retarded is he.. arrest this bastard

Can't believe we are still saying these things. Bhagyaraj has a daughter himself.
Disappointing to say the least. https://t.co/Bimlowveei

Shame on you #bhagyaraj – do you tell the same to your wife, daughter and d-i-l??? https://t.co/pjd0YW3Hxn

What do you think on this speech made by the filmmaker ?? Comment your views below !!

Nine Police personnel including an Inspector arrested for physically torturing a 22 year old law student Abdul Rahim inside a police station that is...

Forget the achievements he is going to make in the future, Thangarasu Natarajan's journey to make a place in the Indian cricket team is...

"Hey Raam" is the first ever film directed by Kamal Haasan in his film career which spans more than 60 years. He also acted...