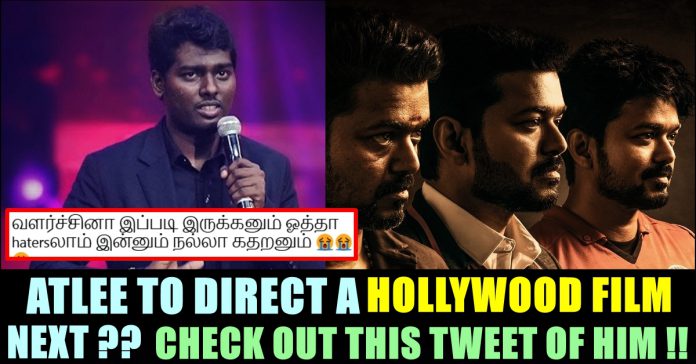 Director Atlee who is known for his collaboration with actor Vijay, is one of the highest paid directors in Kollywood. Being a former assistant of Shankar, Atlee’s way of presenting his films and the castings he choose for the characters are considered as his major qualities. All the three films of Atlee became blockbusters despite of the plagiarism controversies.

Now, the director is all set to see the release of his next film for which he worked hard for 1 long year. The film which was titled as “BIGIL” marks the third collaboration between Vijay and Atlee. They both happened to know each other during the shoot of Shankar’s “Nanban” in which Atlee worked as assistant director.

The trailer of his “BIGIL” released lately and is setting the Internet on fire as it contains many scenes for the fans to celebrate. Meanwhile director has received a message from popular Hollywood actor, producer and director Bill Duke.

@Atlee_dir Greeting from Hollywood…Why is it you think, that it is so complex for our countries to produce films together? #TBD

Atlee immediately replied to him by saying that what he felt is a mere notion. “It is just a mere notion that it is difficult. Different people coming together for the love of cinema only makes it easy & more enjoyable. Honored and humbled to have been addressed by you. This is how big dreams begin. Love & respect to you!” said Atlee in his tweet.

@RealBillDuke It is just a mere notion that it is difficult. Different people coming together for the love of cinema only makes it easy & more enjoyable. Honored and humbled to have been addressed by you. This is how big dreams begin. Love & respect to you! https://t.co/v16LiTsXh4

Bill Duke has starred opposite Arnold Schwarzenegger in Commando and Predator, and has appeared in films like American Gigolo, No Man’s Land, Bird on a Wire, Menace II Society, Exit Wounds, Payback, X-Men: The Last Stand and Mandy. As a director, he has helmed episodes of numerous television series.

As there is a big expectation about Atlee’s next directorial, This conversation of the Tamil director with a Hollywood actor indicates that he could make his debut venture in Hollywood as well. As of now, there were news surfaced that Atlee is going to do his next film with Bollywood superstar Shah Rukh Khan. As soon as this tweet of Bill surfaced, Fans of Atlee couldn’t keep calm as he was endorsed by a high profile Hollywood personality.Check out some of their reactions below :

After the trailer of Bigil released, Bill Dukes asked Atlee if the film is releasing in USA. Check out his comment and Atlee’s reply below :

Thank you so much sir sure sir https://t.co/wS9IHC6LCG

Comment your views on this conversation between Atlee and Bill Duke !!

Previous articleMeera Mithun Threatens “Moodar Koodam” Director To Release Video !! Check Out His Reply To Her !!
Next articlePopular Actress Got Irritated On Seeing “We Are The Boys” Special Show By Vijay TV !! Check Why !!

This is not the first time for actor Jayam Ravi is facing the wrath of Superstar Rajinikanth fans. Earlier he got severely criticized by...

Prasanna shared about things he heard about actor Vikram from director Tharani. Actor Prasanna has seen better times in his career. From the...