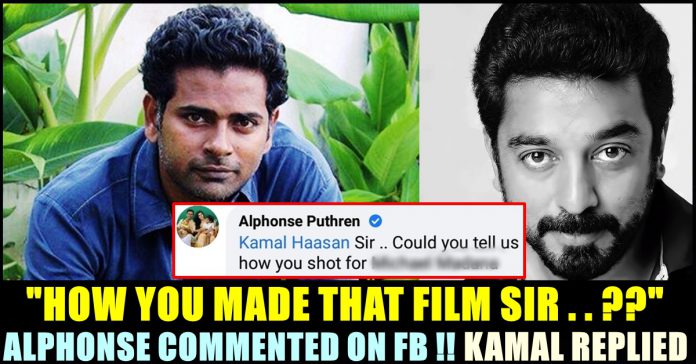 “Premam” director Alhone Puthren is pretty much active in social media platforms ever since the lockdown was implemented. He recently conducted a chat session with his followers about his blockbuster film “Premam” and answered to many of their questions. Most recently, on the 13th anniversary of Kamal Haasan’s “Dhasavatharam” film, Alphonse commented on a face book post of legendary actor Kamal and received a reply from him on Friday.

Alphonse wanted to know how Kamal would have made “Michael Madana Kama Rajan”, a multi action film of the actor in film role. Replying to him, Kamal said that he will share about it soon. The actor said that it was a master class for him and talking about it after years teaches him new lessons. The lovely conversation between the duo grabbed the attention of the Internet as a result of which, screen shots of their exchange is going viral in social media platforms.

On 13th of June, Kamal came up with a Facebook post talk about the actual “FIRST LOOK” of a few of the characters in his widely acclaimed “Dasavatharam”. Sharing the unseen pictures from the photo shoot of the film, Kamal shared about a character he preferred first named “Bhuvanaraghavan”

Now, five days later, Kamal Haasan replied saying “Thank you Alphonse Puthren . Will do soon.
I dont know how much of a learning it will be for you. For me it was, as I had mentioned, a master class. Talking about it after years teaches me new lessons.”

Here’s the comment of Alphonse and Kamal’s reply to it :

Alphonse Puthren who gave a blockbuster film titled “Premam” in the year 2015, is yet to release his next film. Recently, it was reported that the filmmaker is going to make a film named “Paattu” by having Fahad fazil and Nayanthara in the lead roles. Days ago, Alphonse expressed his wish of directing Rajinikanth in future.

“I do have a story for Rajini sir. I have tried to meet him several times after completing “Premam”. Still I couldn’t meet him. I would definitely make a film by having Rajinikanth in the lead role if it is the fate. Let’s wait for the correct time. I have a hope that God would take care of a job if we complete it half way through. I think God is busy destroying COVID 19. Will try after the situation settles” Alphonse replied to a fan who expressed his wish of the filmmaker directing Rajinikanth in future.

Previous articleMADAN Begged Police To Forgive Him ??
Next article“Nan Enna Prime Minister-Aah?” Madan After Getting Arrested !!