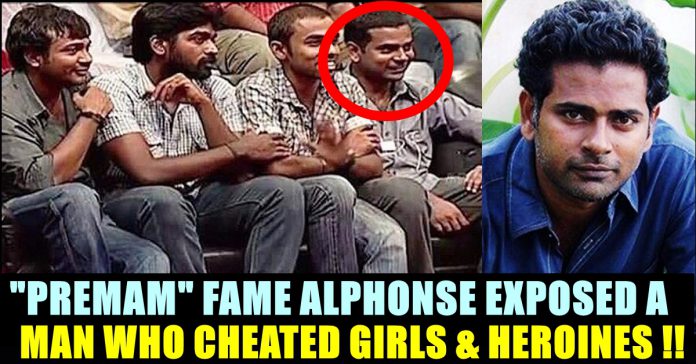 Director Alphonse Putharen exposed the phone numbers of men who are impersonating him and cheating girls who are actresses. The filmmaker who gave a police complaint against the miscreant, warned his fans, followers and public not to get fooled by him. He asked them not to provide any informations such as photos, videos etc and declared it as a scam in his facebook post.

Alphonse Putharen started his career as an editor in “Naalaya Iyakkunar” short film competition which streamed in Kalaignar TV. He is one of the important filmmakers who made their entry into filmmaking during early 2010s along with Karthik Subbaraj, Nalan Kumarasamy and others. His debut film “Neram” was a sleeper hit and a song “Kaathal Ennulle” which took place in the film acted as a trendsetter in tamil film industry and provided a new dimension on how to film montages.

He went on to make a Malayalam film named as “Premam” which became a blockbuster in Tamil nadu. Actress Sai Pallavi and Nazriya gained widespread acclaim only through the works of Alphonse. After “Premam”, Alphonse has announced that he is going to start a film named as “Paatu” by having Fahad Fazil in the lead role. Now, the filmmaker had came up with a shocking post exposing a man who was cheating women.

Alphonse revealed that the phone called the man who is cheating girls by impersonating him. To his shock, the man said that he is Alphonse Putharen to Alphonse himself. ‘9746066514’, ‘9766876651’ are the phone numbers of the cheater, Alphonse said in his Facebook post.

“I want to draw your attention with regard to a person whose number is ‘9746066514’, ‘9766876651’. He has been making fake calls in my name to many actresses in the film industry and even other women too.
I even tried to call him and he picked up saying he is Alphonse puthren , pretending to be me.” Alphonse wrote in his post.

“I have given a complaint to police against him for making fake calls claiming to be me. So please be careful if you get similar calls from the above numbers. Don’t let that person fool you . If you receive any call like this , don’t give any personal information or photos or videos …understand it’s a scam.” he added.

After graduating, Alphonse started making short films and music videos. Arkan and Sutrum Vizhi were his earliest works, completed in college. In 2008, he made the short film Cling Cling. His next work was Neram, a short film which featured Vijay Sethupathi playing a pivotal character. Alphonse later made the music video Flavours, the video of which was shot using stop motion technique. His next short film was The Angel, employing actors Vijay Sethupathi and Bobby Simha in lead roles. He recently worked on editing the promo cut of “Ding dong” song from Thyagaraja Kumararaja’s “Super Deluxe”in Tamil.