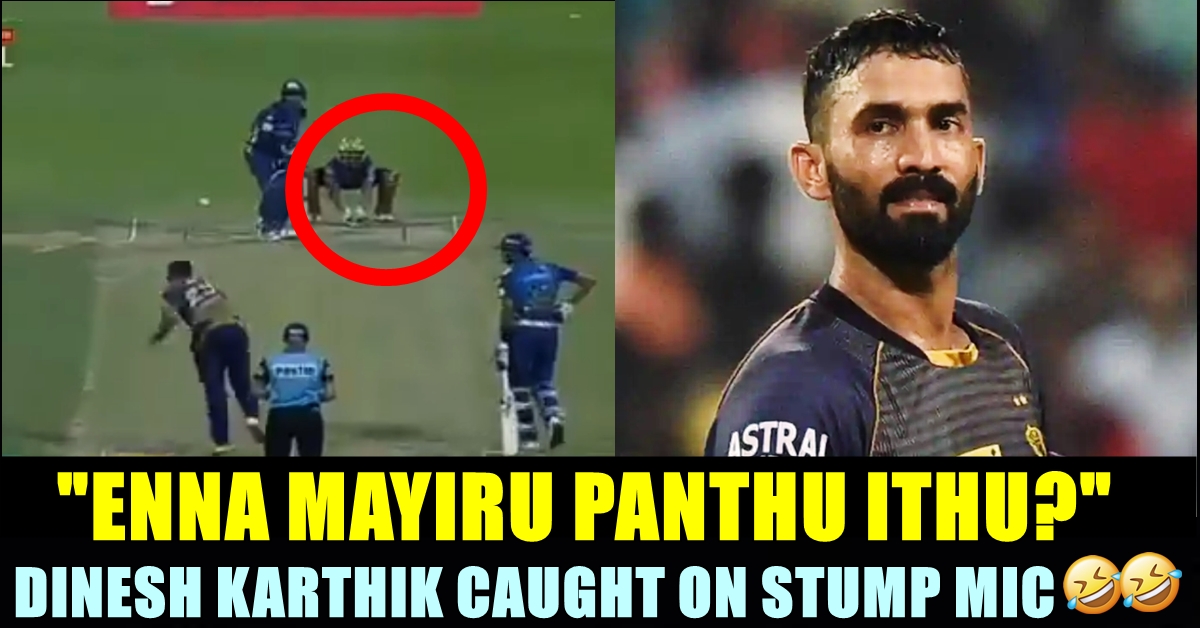 Dinesh Karthik who has been impressing the Tamil speaking followers of IPL tournament with his one liners from behind the stumps, yesterday, went one step ahead and is trending in the social media platforms for uttering a phrase in Chennai Tamil. In the match between Kolkata Knight Riders and Mumbai Indians, Dinesh who has been interacting with Varun Chakravarty in Tamil language, criticized a ball bowled by him like a typical street cricketer from Chennai locality which grabbed the attention of the netizens.

Dinesh who stepped down from captaincy in the match against Mumbai Indians, remained as a wicket keeper/batsman for his team Kolkata Knight Riders. Mumbai Indians, effortlessly won the match by chasing down the 148 runs posted by Kolkata with 19 balls to spare. When Varun chakravarty was bowling the 5th ball, Mumbai Indians were needed 37 runs off 37 balls with 8 wickets in hand.

Kolkata Knight Riders desperately needed a couple of quick wickets to give a come back into the game. At that time, Varun, a Tamil speaking leg spinner, bowled a length delivery which went outside the off stump. De Kock who was going well, nicely pushed it to the leg side to keep the strike for the next over.

Dejected Karthick, to express his disappointment towards the particular delivery, said “Enna Mayiru Panthu Ithu” (What kind of a terrible delivery this is) to Varun Chakravarty which was caught on the stump mic. The particular video clip was captured by the fans and is doing rounds in the social media platforms with hilarious captions. (Also Read : Dinesh Karthik Once Again Instructed Varun In Tamil When Jadhav Came In To Bat !!)

Here’s some of the of DK interacting with Varun in Tamil during the match against CSK :

Wicket keepers getting caught in the stump mic while abusing their fellow teammates in a friendly manner, is not something new. Not many days ago, KL Rahul who is captaining Kings 11 Punjab, abused his teammate while calling him to to come a bit front. The cricketer who immediately realized that he would get caught in the stump mic, could be seen hiding his mouth with his hand.

This is not the first time Dinesh using the language to interact with his teammates. During International matches, while playing with Tamil nadu players like Ashwin, Dinesh made the headlines for giving him suggestions and appreciations in Tamil. Not only Karthik and KL even Dhoni and other Indian wicket keepers would use their respective regional languages to avoid their foreign opponents understanding their game strategies.

Check out some of the reactions for Dinesh Karthick’s immediate response to Varun’s delivery :

As far as the match table is concerned, Kolkata Knight Riders are in 4th spot despite of the loss whereas Mumbai grabbed the 1st spot from Delhi capitals. Comment your views on the key players of Kolkata riders interacting with each other in Tamil !!

Muttiah Muralitharan’s Emotional Statement On The Hatred He Is Receiving !!
Amala Paul’s Savage Reply To A Follower Who Made An Obscene Comment !!