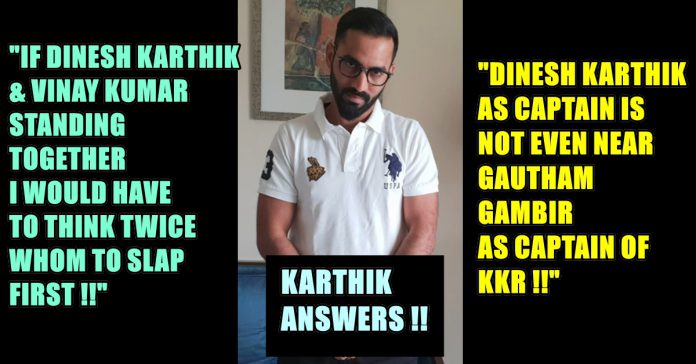 Indians are crazy about cricket so when their favourite team wins, they celebrate the victory like a festival and if the team loses, they don’t mind condemning the team’s captain or the player whom they think has not performed better and because of whom the team has lost.

IPL is reaching towards the play-offs and Kolkata Knight Riders (KKR) has become the third team to enter the play-offs. However, this season has not been very good for KKR and they have just picked up the momentum at the right moment. People have been criticising Dinesh Karthik, the newly appointed captain of KKR, when the team was losing matches and they were slamming him left and right. Innumerable talents ?? Although I agree that he has had the potential to be a great WK batsman, he has been far too inconsistent whenever he’s played for India, a shame that he’s never justified his talent. A guy who started his career before MSD but never reached any heights.

One more user said that he looks like Sonam Kapoor’s husband Anand Ahuja and other one asked him to rename himself as Bengali and become Bose DK.

Usually, cricketers tend to ignore such trollers as it doesn’t result in anything productive but the KKR skipper decided to face them. He not only read mean and harsh tweets but also responded to them. Most of the tweets were sent when KKR was not playing well in the tournament. However, while dealing with some of the tweets, he responded with the best possible option which is silence.

Previous articleBREAKING : Considering The Fan Base Of MUMBAI INDIANS , BCCI Decided To Qualify Them Into Play Offs !!
Next articleThis Famous Actor Proposes Nayanthara In Twitter In a Cutest Way After Watching The “CoCo” Single !!

There's no denying the fact that Vijay is one of the most talented and charismatic stars in the Tamil film industry today. Fondly called...