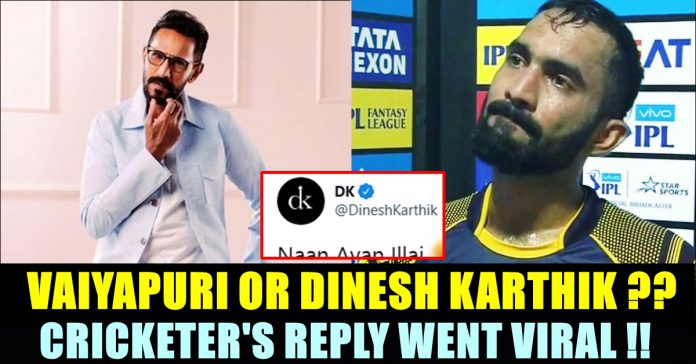 Dinesh Karthik, Indian cricketer and the captain of Kolkata Knight Riders, reacted to a strange comparison through which online users compared the looks of him with Kollywood supporting actor Vaiyapuri who is known for films that got released during early 2000s. On seeing the recent photoshoot pictures of him, many fans said that he has a resemblance of the Tamil nadu cricketer. DK, on seeing the reactions in Internet, came up with a light hearted reply and won the hearts of people.

Krishna Kumar Dinesh Karthik is an Indian wicketkeeper-batsman who made his debut for the Indian cricket team in 2004 and has been a regular member of the team for varying periods since then, including a stint in 2007 as a specialist opening batsman and non-wicket-keeper. Karthik was a batsman in his junior career, but turned to wicket-keeping in order to improve his future prospects.

He gained widespread acclaim among new age cricket fans after beating Bangaladesh with a last ball six in the finals of Nidhas trophy that took place in the year 2018. In the IPL, fans got impressed with his captaincy skills and he recently grabbed headlines by communicating with Varun Chakravarthy in Tamil during the match.

As soon as the photo shoot pictures of Vaiapuri got surfaced in Internet, fans started comparing him with the 35 year old cricketer. Vaiyapuri who is known for acting with Vijay, Ajith, Kamal Haasan and many other top actors of Kollywood, got participated in the season one of Bigg Boss show. Now, to bag film opportunities, the experienced actor involved in a photo shoot and released pictures from it.

On seeing the pictures, many fans thought that it is Dinesh Karthik. “That split second when I thought this was Dinesh Karthik but turns out it’s Vaiyapuri” wrote a fan whereas many others circulated memes and trolls.

That split second when I thought this was Dinesh Karthik but turns out it's Vaiyapuri 😭😱😱 pic.twitter.com/JuQ5t66iQl

Responding to these memes and trolls, Dinesh, without losing his cool, replied writing “Naan Avan Illai. Never knew Vaiyapuri was my doppelgänger all my life”

Naan Avan Illai 😛
Never knew Vaiyapuri was my doppelgänger all my life https://t.co/N4SDLZxSzH

This tweet from his garnered 12k likes with thousand plus retweets so far and many fans lauded the cricketer for his sense of humour. Dinesh Karthik is an ardent fan of Tamil cinema and he never missed to express his admiration towards Tamil films. Most recently, the actor revealed that “96” is his favourite film and also interviewed director Vetri Maaran through video call during intense lockdown.

Comment your views on this reply of the cricketer !!

Previous article“Does He Know That He Is Speaking To Kamal Sir ?” Actor Questioned
Next articleAajeedh’s First Ever Emotional Post After Getting Evicted !! WATCH

Director Alphonse Puthren who is currently busy directing "Paatu" of Prithvi Raj and Nayanthara, has uploaded a tweet in his official Twitter handle, expressing...