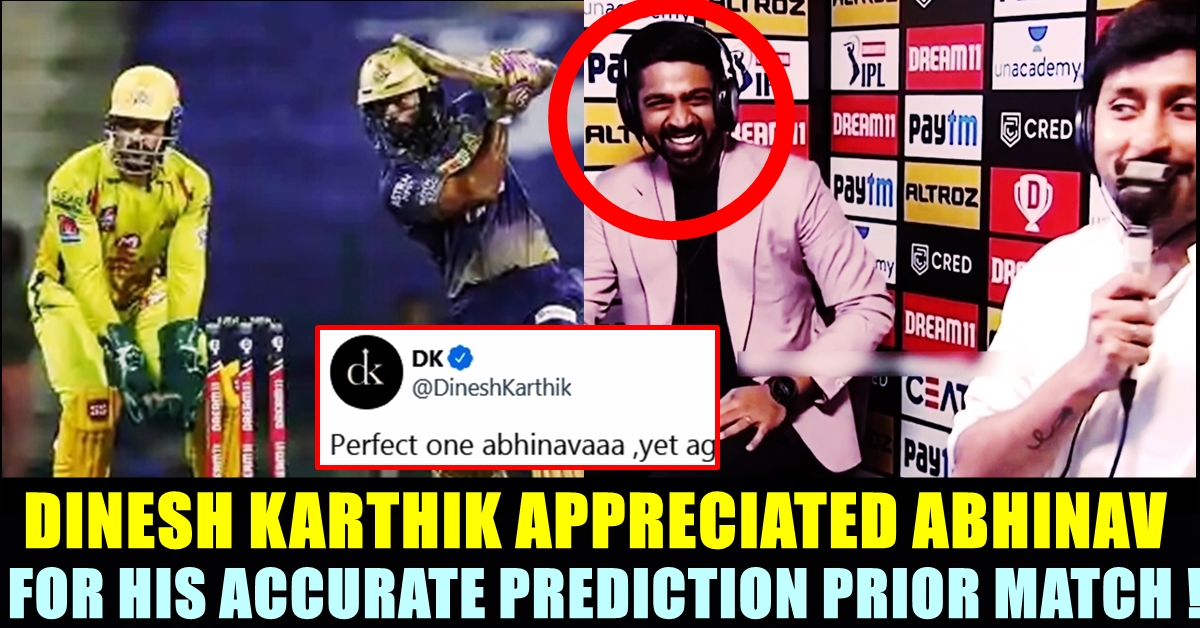 Kolkata Knight Riders captain Dinesh Karthik posted a tweet appreciating Abhinav Mukund, a Tamil nadu based cricketer who is currently doing commentary for the ongoing IPL matches in Star Sports Tamil. The wicket keeper batsman lauded him for his accurate prediction ahead of the match played by KKR against CSK.

After winning the toss, Kolkata Knight Riders decided to bat first and wanted Chennai Super Kings to chase, despite of the wicketless successful chase they achieved against KX1P. The batting order of Kolkata Knight riders have always been under scanner as they would hardly go with the same order they did in the previous match. Unlike other teams who would open with two proper batsmen, KKR was opening with Sunil Narine, a bowling all rounder and Shubman Gill.

However, the west Indian couldn’t middle the ball for past few matches. In the match against Chennai Super Kings, Dinesh Karthik sent Rahul Tripathi with Shubman Gill which worked out extremely well. The 29 year old Tripathi who was playing for Maharashtra, smashed a 51 balls 81 which helped his team to reach a competitive score.

Chennai Super Kings couldn’t chase the total and got restricted by KKR bowlers for just 157 runs with Watson being the highest scorer. Prior the match, Abhinav Mukund who has been doing commentary for Star sports Tamil, predicted that Rahul Tripathi could open the innings with Gill as they both are good runners between the wickets. He who said that the left-right combination could work, also notified the poor form of Sunil Narine in the Pre show.

The video was shared by Star sports Tamil, after his insight worked out well for Kolkata knight riders.

It is also notable that Narine helped KKR with a quickfire 17 while playing below the order. This video grabbed the attention of Dinesh Karthik, captain of the KKR team who lauded Abhinav Mukund for his accurate insight. DK who called Mukund as “Abhinavaa”, said that he is completely enjoying his insight. DK also expressed his happiness over Abhinav showing his knowledge about cricket to the world.

“Perfect one abhinavaaa ,yet again in fact . Completely enjoying your insight into the game and looking dapper too but more importantly I’m happy your new avatar as an expert is showing the world your knowledge about the game” read the tweet of Karthik.

Perfect one abhinavaaa ,yet again in fact . Completely enjoying your insight into the game and looking dapper too but more importantly I'm happy your new avatar as an expert is showing the world your knowledge about the game ❤️👍#newdad #properbrainthisguya https://t.co/3taPyLTiyT

The 30 year old Abhinav Mukund represented country India in 7 test matches as an opening batsman. He is currently captaining the Tamil nadu state team and was a member of Chennai Super Kings and Royal Challengers Bangalore in the IPL. Unfortunately he couldn’t get to play a single match for either team. His highest score in first-class cricket is 300* against Maharashtra.