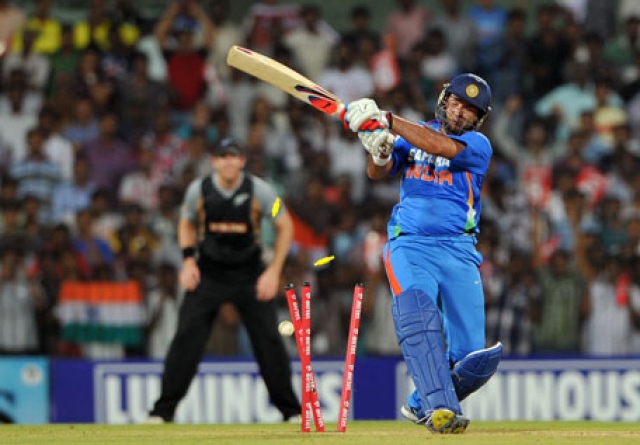 Did You Know? India Has Never Defeated Newzealand Once Also In T20 The Super 10 stage of the ICC T20 World Cup starts on Tuesday, March 15 at Nagpur with hosts India taking on the mighty Kiwis in the opening match. India, the number 1 ranked team in the T20I format, will face an opponent they have never beaten in this format. When India won the tournament back in 2007, New Zealand was the only team that beat India in that tournament.

Apart from that encounter, there have been four more matches between the two. New Zealand has won 4 of the five encounters and the other one has yielded no result. The stats are given below

India’s first super-eight game in the 2007 edition was against the Kiwis. India winning the toss chose to field first. Quick-fire knocks from Brendon McCullum, Craig McMillan and a late onslaught from Jacob Oram helped New Zealand post a huge total of 190 on the board. India while chasing started well. They posted 76 in the first six overs and the chase was truly on. However, New Zealand’s premier left-arm spinner had other ideas. Daniel Vettori came to bowl and literally turned the match on its head with a match-winning spell. Vettori took 4 key wickets at the expense of 20 runs and helped New Zealand win the game by 10 runs.
Brief scores: New Zealand 190 in 20 overs [Brendon McCullum 45(31), Craig McMillan 44(23), Jacob Oram 35(15); RP Singh 4-0-29-2, Harbhajan Singh 4-0-24-2] beat India 180 for 9 in 20 overs [Gautam Gambhir 51(33), Virender Sehwag 40(17); Daniel Vettori 4-020-4] by 10 runs.

The second match of the series was a do-or-die game for India. Once again they were put into bat and this time, India managed to post 149 on the board courtesy of Yuvraj Singh’s fifty. Indian bowlers bowled well but their efforts fell short as New Zealand chased the total on the last delivery of their innings. New Zealand required 12 runs off the last over and it was Brendon McCullum once again who won the game for the hosts.
Brief scores: India 149 for 6 in 20 overs [Yuvraj Singh 50(34); Iain O’Brien 4-0-30-2] lost to New Zealand 150 for 5 in 20 overs [Brendon McCullum 69(55)*; IrfanPathan 4-0-41-2] by five wickets.

The first T20I of the series was washed out as the two teams met in Chennai for the series decider. All eyes were on Yuvraj Singh, who was making a return to the International Cricket after a heroic battle with cancer. India put New Zealand to bat and once again they became a victim of McCullum’s blitzkrieg as he smashed 91 from 55 balls and helped New Zealand post a total of 167. India while chasing required only 48 runs from 40 balls as the skipper, MS Dhoni had walked out. Surprisingly, India fell short by a single run and Dhoni remained not out 22 from 23 balls. It surely was an uncharacteristic knock from the best finisher in the business.
Brief scores: New Zealand 167 for 5 in 20 overs [Brendon McCullum 91(55); IrfanPathan 4-0-31-3] beat India 166 for 4 in 20 overs [ViratKohli 70(41), Yuvraj Singh 34(36); Kyle Mills 3-0-17-2, James Franklin 4-0-26-2]  by one run.
So for India, they would dearly love to break the jinx this time around in the T20 World Cup. The Black Caps have a formidable team this time too but they will dearly miss the services of their former skipper Brendon McCullum, who recently retired from all forms of the game.
Previous article20 Memorable Foreign Trips With Your Family Which Will Cost You Less Than An iPhone X
Next articleHow Sai Ram Engg College Students Are Tortured By Goons – Step By Step Explanation By Alumni

Actor Siddharth Strongly Condemned Rajini’s Statement & Check What Twitter Users Including Actress Kasthuri Did To Him !!

Rajinikanth's visit to Thoothukudi, where 13 people were killed by police firing last week, did not go as smoothly as the actor-politician would have...

MA Sneha, a lawyer by profession, was brought up in a family that did not believe in caste or religion. She said she had...