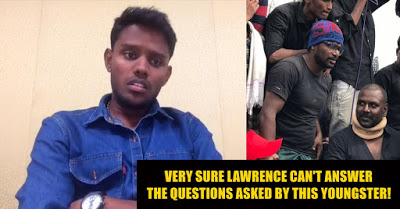 The Jallikattu events around the state has ended up in success. We had many unsung heroes emerging out of the masses thanks to their participation in the protest. Though their contribution were cumbersome, their names reached out to the masses much more than those who stood in the day and night raising voices. One of them was Raghava Lawrence. Everyone of us had a really deep respect after his campaign, but this lad makes us double check our perceptions.

He starts of by asking why he didn’t take part in the previous protests. Like the one held on Jan-8 by Care and Welfare trust- an NGO, and the protests supporting the farmers which were held on the same day. He also points out that Lawrence wasn’t present during the start of the protest. Unlike Hip Hop Adhi, Lawrence didn’t make any public releases about his support for Jallikattu and thus, calling himself as one of the pioneers of this revolution doesn’t make proper sense.

But his major argument comes at a point when he asks about the was the 1 crore he said he has spent was amassed. As a public request, he asks Lawrence sir to give a statement about how the amount was amassed, whether it was his income or his philanthropic organization’s? He also questions him about how it was spent, and the ways he told it was spent was true.

This was seemed more evident when even the organisational committee in many places preferred some well known members to be present in the event, not allowing students who were a major part in it to witness it. The way he participated in the protest is another issue to talk about, but clearly mentioning that it was him who led the students to amass this huge victory is doubtful without second thought. It was students who were leaders. Everyone of us was one. There was no leader to lead us, and no one should take credits for the protest led and won by the students.

You could see the video here.