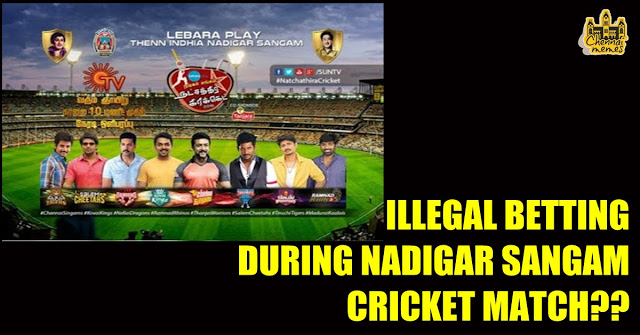 The whole of Tamil Nadu is witnessing the star-studded tournament of the Nadigar Sangam, which has been organized to raise funds to build a new office and pay back debts taken in by the Sangam over the years.
However, the industry is now abuzz with rumours of illegal betting going on over the tournament, while several other sources also add that such rumours are being fuelled over internal differences, and that no such betting is going on.
A source closely involved with the organizing committee of the Nadigar Sangam’s Star Cricket Tournament alleged the involvement of senior members of the executive committee in betting activities over the tournament being held at Chepuak. He claimed that the people involved in betting held a meeting at The Park, Nungambakkam early on Sunday morning.
But there have also been denials. “These are baseless rumours. These rumours are spreading due the internal politics that is plaguing the organisation,” said a senior member of Nadigar Sangam to The News Minute.
The new building which is to be constructed is allegedly  facing some approval issues from the Trustees, due to which some senior heads are reportedly considered stepping down from their posts. Media reports also suggest that there is a clash of opinions between the newly elected office-bearers.
“All the office-bearers of the Sangam have been working in close cooperation and in perfectly amity under Nassar’s leadership. There is no truth in the reports which have said that there was a rift among us. Nobody can create any mistrust or lack of faith among us,” said Actor Vishal, General Secretary of the Sangam.
Eight teams will be participating in the Sangam’s Star Cricket Tournament today at Chepauk, and each game will be a six-over match.
Continue Reading
Advertisement
Related Topics:Articles, Chennai, Cinema, Entertainment

Know Why Indian Films Especially Tamil Movies Have Intervals? Here Is The Reason..
Checkout What People Of JAPAN Think About Thalaivar Superstar RAJNIKANT!!