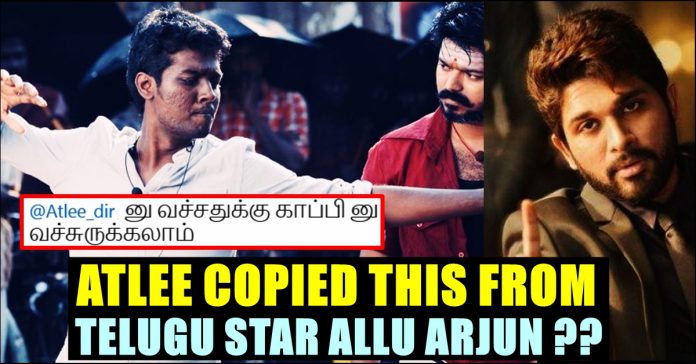 Did Director Atlee Copy This Too ??

Director Atlee once again became the victim of mindless trolls of online medium. Atlee is arguably one of the most loved and hated filmmaker of Tamil cinema right now. Being a former assistant of Shankar, Atlee’s way of presenting his films and the castings he choose for the characters are considered as his major qualities. All the four films of Atlee became blockbusters despite of the plagiarism controversies. His recent release “BIGIL” has reportedly collected 300 crores in the box office. The film marks the third collaboration of the duo, after “Theri” and “Mersal”.

Being one of the most paid filmmakers of Kollywood, Atlee is now all set to debut as director in Bollywood according to sources. Apart from being trolled for copying plots from cult films, Atlee also got trolled for copying captions for his social media posts, a couple of times. Earlier the filmmaker got trolled for copying a caption from a twitter handle while wishing director Shankar for teachers day. (Read : Atlee Wished Shankar For Teacher’s Day & Got Brutally Trolled For Copying The Caption !!)

Now the filmmaker again getting trolled by a set of Twitter users who are alleging that he copied the post of actor Allu Arjun while responding to the encounter made by Telangana Police in the rape and murder case of a Veterinary Doctor. Atlee, in his official twitter account posted a picture saying “JUSTICE SERVED” by adding a caption “Justice served May the fear spread Hats off”

Justice served
May the fear spread
Hats off pic.twitter.com/Z3fA5gSwiD

Director Atlee posted this tweet around 4 PM of 6th December whereas Telugu actor Allu Arjun posted the same picture around 9 in the morning on the same day. Check out his post below :

On seeing both these posts, few of the twitter users who always intended in posting troll posts, started trolling director Atlee by accusing him of stealing the post of Allu Arjun. Few even mentioned the original account of the filmmaker to make him notice about the accusation. Check out some of their reactions below :

What do you think on the director getting trolled this way ?? Comment your views below !!

Previous articleJUST IN : Nayanthara’s Statement Regarding The Encounter !!
Next articleSiddharth’s Open Statement Against PM Modi For Greeting Nithyanandha !!

Sivakarthikeyan's speech about the looks of Korean actors triggered a number of online users. The actor, in a speech in front of school students,...