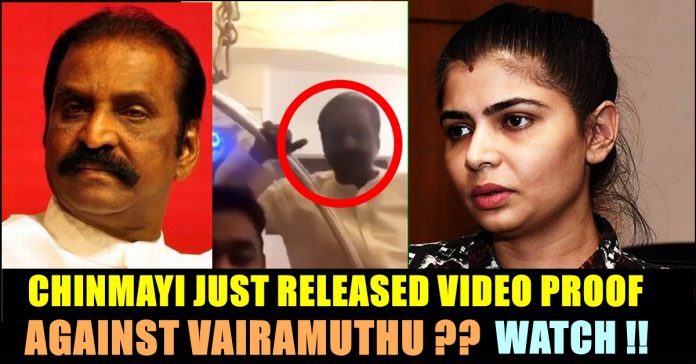 Chinmayi is one of the celebrity who is actively posting tweets regarding the brutal case of rape and murder of doctor Priyanka Reddy. Being a representative of MeToo movement in south India, Chinmayi earlier exposed the trauma girls are going through after the news of the Gang rape surfaced.

Now in a series of tweets, Chinmayi described what she went through when she accused lyricist Vairamuthu. The singer explains how she was portrayed by the media and how people demanded her to die in order to prove that she was sexually harassed. “Society likes a dead girl. They dont like women who fight, speak, say they have been groped / raped / molested and go on to live lives.” one of her tweet said. She even questioned the powerful people who posted heart breaking message on the victim’s death. Check out her tweets here :

Chennai Journalists at a press meet I didn’t know I was supposed to attend and rushed to had photographers zooming into my arms, armpits, breasts while I adjusted my hair. Multiple youtube channels shamed me for wearing a T Shirt and a full skirt 🙂
Plus the caste angle.

Plus – Society likes a dead girl. They dont like women who fight, speak, say they have been groped / raped / molested and go on to live lives. In their minds a ‘victim’ is supposed to LOOK a certain way. Hell, people criticise Nirbhaya’s mother for fighting and ‘coming on TV.’

Do ask yourself – How many influential, rich men with politician buddies who tweeted “heart is bleeding”, “need strict laws” – worked with NGOs and lawyers to change policy, maybe helped rape victims hire good lawyers, use their social capital to bring change via PSAs?

On seeing these tweets of Chinmayi, one of her follower who felt that Vairamuthu didn’t deserve “Mr.” infront of his name, wrote “”Mr.” Vairamuthu ! That rotten scum deserves no such title.”

“Mr.” Vairamuthu !
That rotten scum deserves no such title.

In a way of replying to this tweet, Chinmayi shared a video of Vairamuthu’s live along with A.R Rahman. In the video, we can see A.R Rahman reading out the comments they are receiving loud. When Rahman reads a comment saying “I love you Vairamuthu sir”, we can hear Vairamuthu saying “Check whether it is a man or woman, we can take care of the age later” after which both of them seen laughing out louder. After that A.R Rahman lets Vairamuthu know that what he is talking is streaming in live.

Check out the video shared by Chinmayi here :

Though we don’t know about Vairamuthu’s intention behind the question in this video, it grabbed the attention of many users of Twitter as it was shared by Chinmayi. Surprised followers of Chinmayi asked her whether it is a recent video or not to which the singer remained calm.

What do you think on the video shared by Chinmayi ?? Comment your views below !!

South superstar-turned-politician Rajinikanth has said the BJP "is attempting to saffronise" him but he "will not be trapped" -- a comment seen by many...