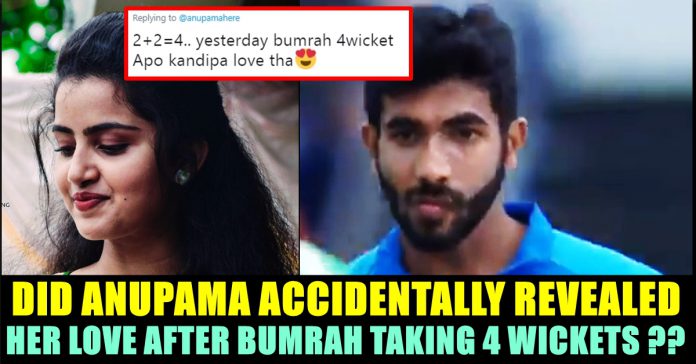 At 25, Indian bowling attack’s main man Jasprit Bumrah has cemented a place in the squad and the hearts of every death-bowling lover of the sport.

Currently ranked no.1 in ODI, Bumrah once again lived up to the hype and his reputation when Bangladesh’s Mohammad Saifuddin’s fancied his chances to push the Tigers across the finishing line, chasing India’s 315.

Bumrah did not uproot Saifuddin’s wicket but ensured that the tail-enders weren’t around either to help the cause. Returning to ball his last and 48th over of the second innings, Bumrah sent the last two in two balls and Bangladesh out of the World Cup. Mashrafe Mortaza’s spirited side was handed a 28-run defeat which booked Virat Kohli & Co’s ticket to semi-finals.

However the fans of Bumrah, were seen in the comment section of Anupama Parameshwaran’s latest post. In her tweet post, Anupama is seen showing two from both of her hands. After seeing that post, many fans of the seamer assumed that Anupama is indicating the four wickets took by Bumrah.

On seeing her posing in this way many of her followers thought that she indicating the number of wickets Bumrah took in India’s match against Bangladesh. Check out some of their reactions here :

Yesterday bumrah has taken 4 wickets.. In this pic you are showing 4 fingers… Everything is interlinked…

Cc @Jaspritbumrah93 she is saying u took 4 wickets yerterday