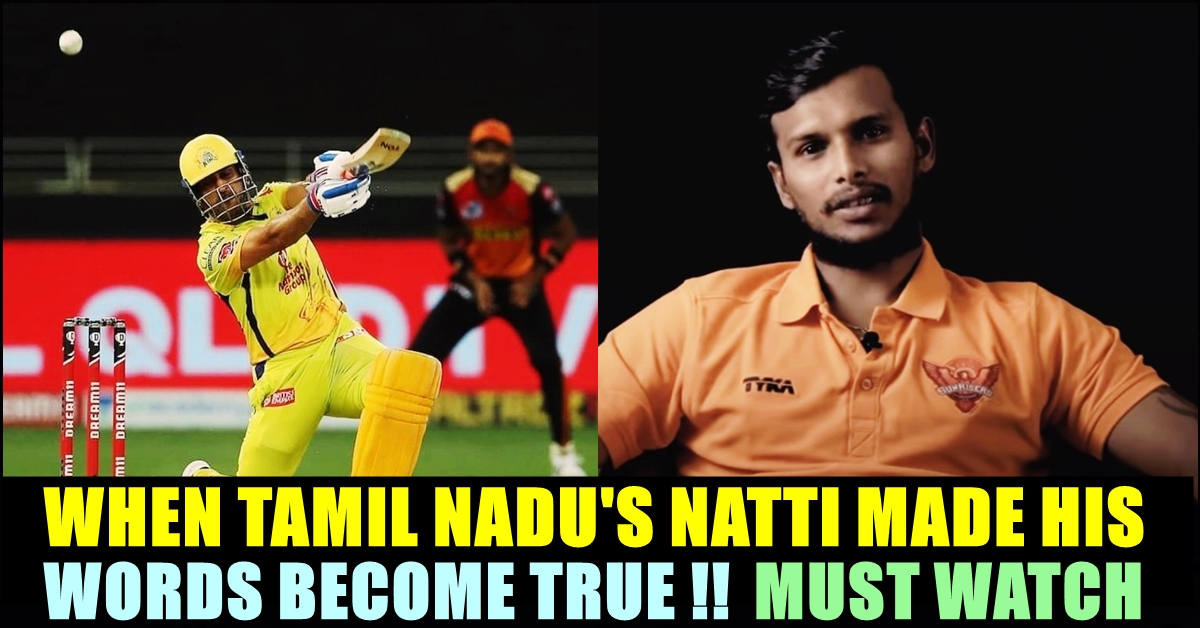 Chennai Super Kings is competing with Sunrisers Hyderabad in the second round of the ongoing IPL tournament. As of now, the SRH batsmen Warner and Bairstow came in the middle to chase the 168 runs posted by Chennai Super Kings team. Both the teams are desperate for a win as it is the only way to make it to the play offs.

In the batting innings of CSK team, Watson became the highest run scorer with his 42 runs in 38 balls. However, what helped the team to reach the decent total is Ravindra Jadeja’s 10 balls 25 runs. Captain MS Dhoni scored 21 runs from 13 balls and got out in a delivery bowled by Natarajan Thangarasu.

Natarajan Thangarasu is a Tamilian who belongs to a small village named Chinnappampatti of Salem which is located 340 Kms away from Chennai. In the 19th he bowled against Chennai Super Kings, he conceded 14 runs. Starting with a wide, Natti gave four off his first ball he bowled to Jadeja. The next three balls we went for just three singles with his brilliant bowling. He restricted Dhoni from going for the maximum by bowling the wide yorker which is a bit difficult to execute. However, in the fifth ball, Natti bowled it right on the slot which is a zone belongs to Dhoni. The former Indian cricketer sent it out of the park for a 102 meter six.

In the very next ball, Natti sticked to his earlier plan and executed a wide yorker. Dhoni who tried to hit it for another maximum couldn’t connect it well and was caught in the short by Williamson. Mahendra Singh Dhoni got out for 21 runs. The most interesting thing about the wicket of Dhoni in this match is, that Natti made his long time wish come true and also the words he spoke to Ashwin two days back in his youtube channel became true.

In the youtube Channel of Ravichandran Ashwin, the experienced spin bowler invited Natti as he was performing extremely well in the ongoing IPL tournament. When Ashwin asked Natti how he would bowl against CSK when they are required 15 runs in one over, the pace bowler said that would stick to his skill, irrespective of the batsman which exactly happened today.

“It doesn’t matter who is batting, I would believe in my strength. I won’t feel bad if i got outsmarted while giving my best. Even if I bowl one wrong delivery, I will stick to my strength for the rest of the 5 balls” he said which exactly happened in today’s match. When he bowled a slot ball, it went for a six but he came back by bowling a yorker which is believed as his strength. “I won’t try anything different” Natti added to which Ashwin said that it a big lesson to upcoming young bowlers.

Comment your views on this young Tamil nadu talent’s accuracy in execution !!