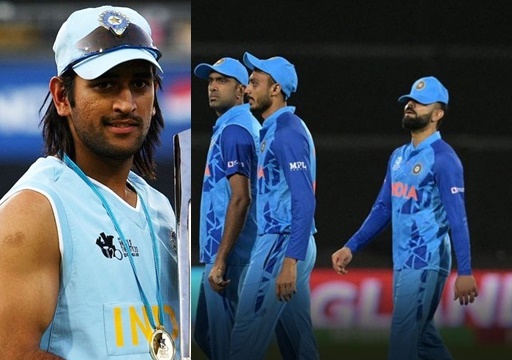 Former Indian captain Mahendra Singh Dhoni’s tweet is trending in the micro blogging social media site after team India faced a humiliating loss against England in the semifinals of the ongoing t20 world Cup tournament. In the tweet which was posted on 2nd of December, 2011, the cricketer asked his followers to listen to “Emptiness” of Rohan Rathore. Many of Indian cricket team’s fans felt emotional and said that the tweet is relevant to the current situation. In General, the cricketer’s achievements as a captain of team India, quotes after winning knockout matches are being widely shared after team India lost with 10 wickets difference. Even former Indian opener Gautham Gambhir who is known for demeaning the achievements of Dhoni as captain, hailed him after India got knocked out at the semis.

After losing the toss, India who batted first, posted 168 runs in the first innings with the help of Virat and Pandya’s half centuries. Team England chased down the total effortlessly and India was never in the game throughout the second innings. Without losing a single wicket, England sent India out of the tournament.

Here’s how fans got reminded about Dhoni’s captaincy in ICC events after team India’s poor performance :

No disrespect to any cricketer but I miss Dhoni and his art of winning cups! ❤️😭

Those were the days under legend #dhoni . Best captain, leader ever. pic.twitter.com/K2WNTRwJak

MS Dhoni was not “lucky”. He was a bloody good captain and an exceptional reader of the game. He could find a match-winner out of anyone.

That, my friends, is not luck. Being the only captain to win all three white-ball ICC trophies can’t be luck.

No one can match the legacy of MS Dhoni the captain! pic.twitter.com/49y6zrJq5k

In the meantime, a 11 year old tweet of Dhoni suggesting his followers to listen to “Emptiness of Rohan Rathore” is also trending. “Ok guys listen to EMPTINESS by rohan rathore” read the tweet of the cricketer.

“The Indian Cricket Team without you is Empty as well Dhoni sahab. We cannot replace you” a user said sharing the tweet whereas another one wrote “ICT is empty without you”

ICT is empty without you https://t.co/tHEvQrLb7f

The Indian Cricket Team without you is Empty as well Dhoni sahab
We cannot replace you https://t.co/FIvQ01GDMf

MS knew it before
So he had left Medicine for us
Do listen guys https://t.co/hxh0bQBTgZ

Apt for the moment 🙂 https://t.co/0bWCyxuUBs

Here’s How Ajith Reacted When Director H.Vinoth Uttered A Bad Word In Front Of Him !!

Director H.Vinoth, in a recent interview with a daily magazine, opened on how actor Ajith reacted when he uttered a bad word on the...