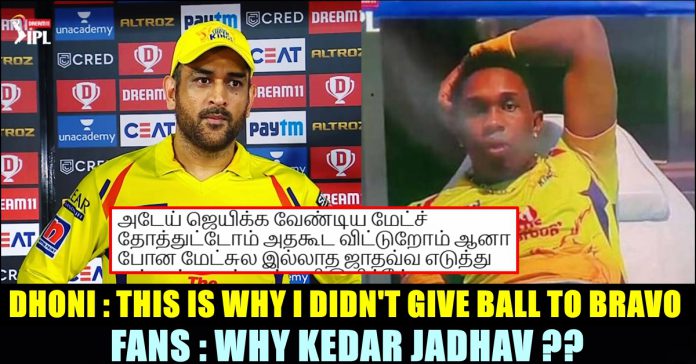 Team CSK registered their 6th loss in the ongoing IPL tournament and their path to enter playoffs looks blurrier now. They lost their second league against Delhi in the tournament after dropping four catches of Shikhar Dhawan who went on to score his first ever IPL century. When the team came back in the 19th over with Sam Curran’s economic bowling, it lost in the final over which was bowled by Ravinder Jadeja.

When the experts and fans of team CSK were expecting Dwayne Bravo to bowl the last over in which Delhi needed 17 runs to win, surprisingly, Dhoni gave ball to Jadeja. He who conceded a single in the first ball, bowled a wide in his next. After that, Jadeja went for three sixes which made the yellow team to register their 6th loss.

In the post match presentation, when Dhoni was asked why he gave ball to Jadeja instead of Bravo, the former Indian captain said that Bravo ot injured and couldn’t come back to the field. “Bravo was not fit, he went out and was really not able to come back. That was the reason we had to bowl Jadeja. The option was between Karan and Jadeja so I went ahead with Jadeja. Maybe not enough.” he said in the post match interview.

“Shikhar’s wicket was important, we did drop him quite a few times. He’s somebody if he is batting, he’ll keep ticking the scoreboard. He’ll keep taking his chances. If he’s there on the crease, he’ll always maintain a good strike rate. I felt his wicket was crucial. Also there was difference between the first innings and the second innings. The wicket behaved slightly better in the second innings, it came on slightly better which made it slightly easy for the batsmen. But overall, we can’t really take the credit away from Shikhar, he batted really well and was supported really well by the other batters.” he added.

However, fans not convinced with the reasons addressed by Dhoni regarding the loss. They started criticizing the team and are posting tweets stating the probabilities that could have been tried. Most of the fans are highly disappointed with the drop catches and with the decision of playing with Jadhav again.

They raised a genuine question asking why they couldn’t bring Jagadeesan into the team as he performed well in the last match he played.

CSK should drop Jadhav, but they are dropping Dhawan. #CSKvsDC

Dear #CSK – Your next match is on Monday.. Tomorrow is Sunday.. After returning from #Sharjah tonite to #Dubai – Do catch practice all day tomorrow.. Thank you!#IPL2020

Whoever said "If it aint broken, don't fix it" never watched this IPL season. #ugh.

Chennai gave Dhawan enough chances and he made them pay big time. Nobody to blame but their catching. They did have a good score on the board but if you field like that, you don't create enough pressure and a loss is well deserved

Whenever jadhav plays, we lose. why jadhav instead of jegadeesan who did well in his last match? Until u refuse chance to TN youngsters and giving chance to wastage jadhav, our CSK will lose..Our TN players are rocking in other teams, but in CSK they r not given chances 🤦🤦🤦 pic.twitter.com/SWy8tQwtnP

2020 Csk team infront of fans – after not selecting an efficient team and doing poor fielding in crucial matches. pic.twitter.com/YWrgH0hT0M

Previous articleArchana’s Attitude Towards Suresh Irked This Actor !!
Next articleRekha’s First Post After Getting Eliminated From BIGG BOSS Show !!

Siddharth Finally Opened On The Cryptic Tweet He Posted After Samantha’s Divorce !!

Pan Indian actor Siddharth who is pretty much busy promoting his upcoming Telugu film "Maha Samudram", during an interview, opened on the recent tweet...