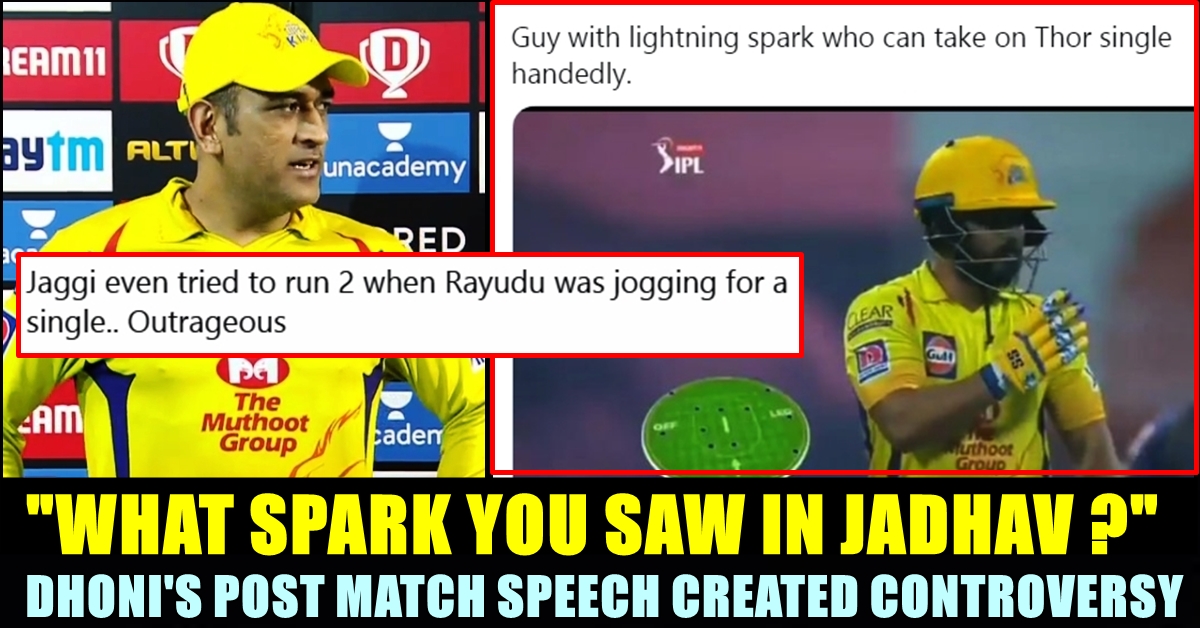 Mahendra Singh Dhoni’s post match presentation speech after losing the 6th game in the ongoing IPL tournament created huge outrage among fans. The cricketer who is known for his sensibility, said that he didn’t see any spark in the youngsters to push them forward in this tournament. He also called off the opportunities of CSK getting into the play offs and said that he is going to give youngsters a chance to play in the upcoming matches.

After winning the toss, Chennai Super kings decided to bat. With a mediocre start and poor batting in the middle order, the team managed to score 126 runs in the 20 overs which is the least by a team in their first innings in IPL 2020. Rajasthan Royals, despite of losing early wickets, chased the total pretty comfortably and pushed Chennai Super Kings to the last spot in the points table.

“It’s not always supposed to go your way. That’s why what we try is going back to the process and see if the process is wrong or maybe we weren’t able to execute. Result is always a byproduct of the process. What it does is it helps you think in a positive way. We play in front of millions of people so there is nothing to hide. The fact remains that if you’re busy with the process then the undue pressure of results doesn’t get into the dressing room. We’ve tried a few things. That’s one thing you don’t want to do. You don’t want to chop and change a lot. Because what happens is after three-four-five games you’re not sure of anything.” Dhoni said about the consecutive losses of his team.

“Fair enough, this season we weren’t really there. Also there were few chances to the youngsters. Maybe we didn’t see the kind of spark that they could’ve given us to say okay you know push the experienced guys and make space for them. But what this result has done is give those youngsters whatever is left in our league stages. They will get a chance and have no real pressure on them so they can go out and express themselves. And give us the option of looking at the other options in the batting lineup or where they’d like to bat.” he added while talking about the future of CSK team in the ongoing tournament.

This speech from the cricketer made many fans of CSK upset. Former world cup winning cricketer Cheeka aka Srikanth asked what spark he saw in Jadhav and Chawla. Many of them believed that Jagadeesan who played in place of Jadhav in one match showed the spark Dhoni needed. They also said that he could see the spark in the youngsters only if they are given a chance.

" We didint see any spark in youngsters to push them " ~ Dhoni

Dhoni in his nonchalant way called off CSK’s chances this season more or less in that interview. As a fan of CSK and MS, I’d like to think that with that resignation it is fair to ask for some empathy. Some passion. Some closure as CSK isn’t no low key franchise. Deserve better.

Disappointed with the way Dhoni addressed the youngsters chances in post match interview. He said the youngsters didn't provide the spark to replace the old players. Not sure what Spark Jadhav showed or what spark Jagadeesan didn't.

Guy with lightning spark who can take on Thor single handedly. pic.twitter.com/zb0r6A2BFR

Also, I found the speech very rhetorical. Same process-result-by product things. These things don't really matter. Intent was the word. When you keep a long stride forward to dab a spinner, you're already playing premeditatedly defensive. You're boosting the bowler's confidence.

Never expected this from MSD… seriously some confusion in the team management😶😶 reason why Raina left and Harbhajan didn't even join??!!🤦‍♂️

Jaggi even tried to run 2 when Rayudu was jogging for a single.. Outrageous

Actress Trolled Contestants Who Cried For Rekha’s Eviction !!
Internet Demands Immediate Arrest Against The Guy Who Made Rape Threat To Vijay’s Daughter !!
Advertisement