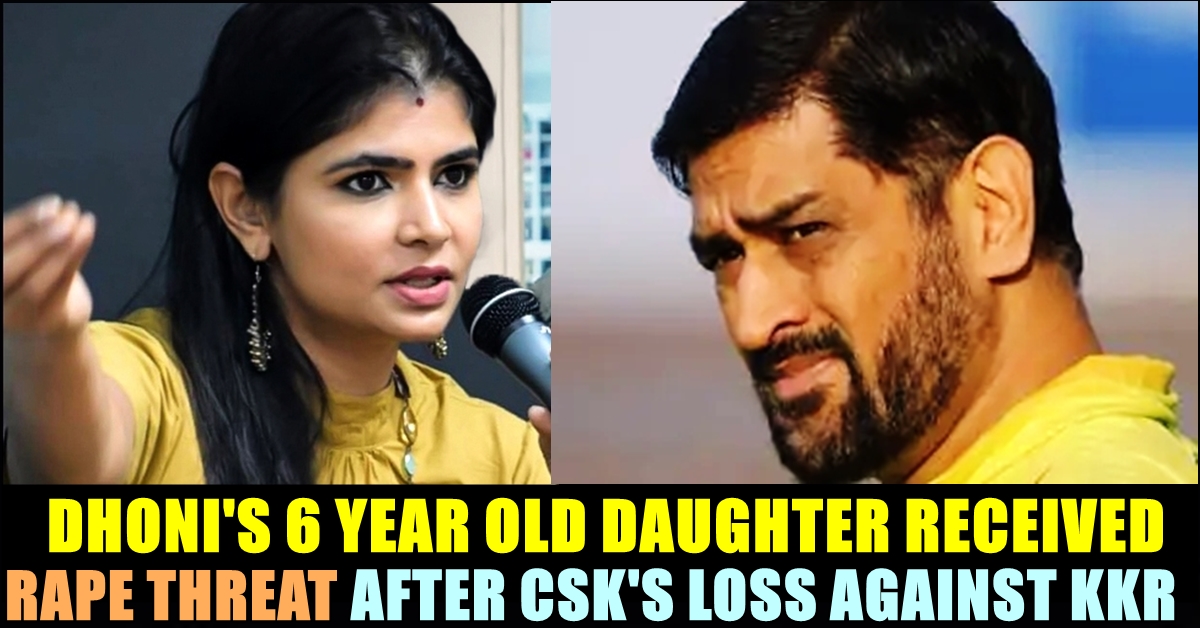 Several media portals including News 18 have been reporting on the inhumane comments that surfaced in Internet after the loss of Chennai Super Kings against Kolkata Knight riders. The so-called fans who were abusing players and their personal lives for all these years, now, went beyond limit and posted comments threatening to physically hurt the former Indian captain’s six year old child Ziva Dhoni.

After CSK lost the match against KKR due to middle order collapse, fans of the CSK team were trolling Kedar Jadhav based on his performance. Some who didn’t like the way Dhoni batted, made fun of him as well. But some miscreants, posted comments in social media abusing the child. Irked with their online activity, many people including singer Chinmayi, representative of South India’s MeToo movement has expressed their anger in tweet form.

The disturbing comments were mostly written in Hindi language and were captured screenshot by the fans who couldn’t tolerate seeing them.

Do people realize what shithole we have become? Can you even imagine where we are heading as a country?

People abusing Ziva Dhoni for yesterday's loss??? Wtf is wrong with you mfs?

6 Year Old Ziva Is Getting Rape Threats Because Dhoni Didn't Play Well Yesterday
This Is India,I'm Disappointed As An Indian😕😞
I Trolled Kedar In The Lightest Way I Cud
But I Didn't Abuse Him
Who Are These Bastards Who Are Absuing Kedar And Dhoni 😡#CSKvsKKR #SRHvsKXIP pic.twitter.com/4e24OUrNGH

So Ziva Dhoni, a tiny small child, is getting rape threats because her father MS Dhoni didn't perform well in IPL or something?????

I hate this country and it's men. Hate it. Mard ki jaat sali mdrchd hai.

Most of these comments took place in the Instagram posts of Dhoni’s wife Sakshi. On seeing such retardness from the men of India, Chinmayi took to her official twitter account and wrote “A cricket player’s 5 yr old getting rape threats shows what we have become. Or were we always this; and social media is now exposing these people? Unless the Govt and Police take cyber crime seriously we are all unsafe. But then where does the Govt have the time for this?”

A cricket player’s 5 yr old getting rape threats shows what we have become. Or were we always this; and social media is now exposing these people? Unless the Govt and Police take cyber crime seriously we are all unsafe. But then where does the Govt have the time for this?

This is the most inhumane activity that ever took place in online medium. Government must look for ways to find these culprits who are hiding behind a smartphone and acting as a threat to this entire country’s dignity !!

For Not Wearing Safety Mask, TN Constable Questions About Caste Details !!
First Tamil Film To Be Experimented On Theatres Amidst COVID 19 Crisis !!