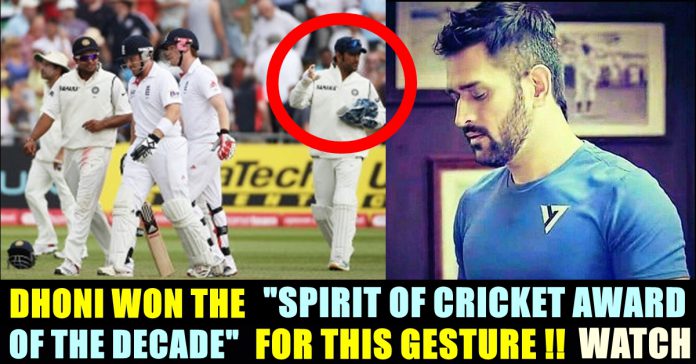 For calling back England Batsman Ian Bell to bat after bizarre run out in the Nottingham Test match in the year 2011, former Indian captain Mahendra Singh Dhoni won the ICC Spirit of Cricket Award of the decade. The cricketer who is known for his calm and composed nature has won the award and his gesture in the match is now established as one of the most heartening gestures on the field in the last 10 years.

“The former India captain was chosen by fans unanimously for his gesture of calling back England batsman Ian Bell after a bizarre run out in the Nottingham Test in 2011.” read the post of ICC which earlier announced Dhoni as the captain of its T20 and ODI teams.

The former India captain was chosen by fans unanimously for his gesture of calling back England batsman Ian Bell after a bizarre run out in the Nottingham Test in 2011.#ICCAwards | #SpiritOfCricket pic.twitter.com/3eCpyyBXwu

The ICC awards of the decade recognizes best players across the Cricket over the past 10 years, invited fans to vote for the first time by selecting the winners across categories including the Sir Garfield sobers and Heyhoe flint awards, which celebrate the best overall player from the men’s and women’s game over the past decade. Fans provided 100% of the vote for the spirit of cricket award of the decade from the list of a past winners since 2011. Reports suggests that 1.5 million fans from across the globe have casted 5.3 million votes to the best players of the decade.

Meanwhile, fans are also talking about the controversial run out incident that took place in the year 2011. During the test match that took place in Nottingham, England’s Eoin Morgan flicked one off Ishant Sharma towards deep square leg, where Praveen Kumar made a boundary save without his own knowledge. However, on seeing the body language of Praveen Kumar, English batsmen Eoin Morgan and Ian Bell assumed that the ball touched the boundary rope.

When the ball was received by MS Dhoni from Praveen Kumar, Bell jogged casually towards Morgan thinking that it was the end of the session. So far, umpire hasn’t made any signal such as boundary or end of session or end of an over. Dhoni passed the ball to a fielder (Abhinav Mukund or Wridhiman Saha) and ordered him to dislodge the stumps and team India appealed to the leg umpire for the run out Ian Bell.

On field umpires signalled the TV umpire to give his decision and the big screen concluded that it was an “OUT”. Bell got disappointed and the English crowd started booing at the Indian players. However, during tea break, Captain Dhoni, after discussing with his teammates, withdrew the appeal and allowed Bell to bat.

Bell was at 137 during this incident and got out after scoring 159 runs for his team. Half centuries from Morgan, Matt Prior and Tim Bresnan helped team England to finish their innings at 544 and team India needed 477 runs in the second innings to win the match. Though India lost the match with a huge margin of 319 runs, Dhoni, for his spirit had won the award after 9 long years.

Previous articlePrabha’s First Instagram Post After Seeing His Wife !!
Next article“My Only Aim In Life Is To Defeat Vijay” – Ajith !! WATCH

It has been officially announced that season 5 of Tamil Bigg Boss is going to be launched from 3rd of October and fans of...

CONFIRMED : This Contestant Is Going To Get Evicted On Sunday’s Episode !!

As it has been confirmed that Jithan Ramesh is going to get evicted on Saturday's episode, details on the eviction for the Sunday's episode...

“Neethane” Song Is The Main Reason Behind IT Raid In Vijay’s House ?? WATCH

Officials of Income tax department inquired actor Vijay in the shooting spot of director Lokesh Kanagaraj's "Master". The film which is going on floors...