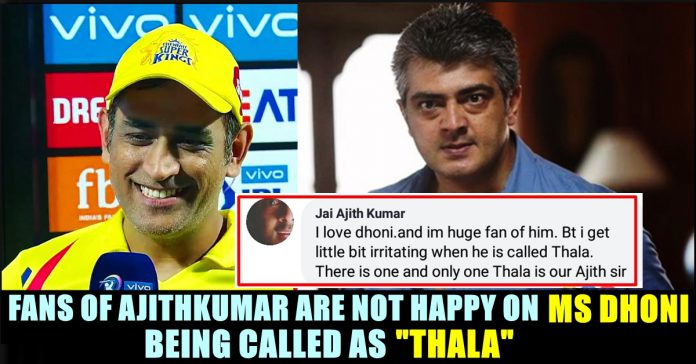 MS Dhoni and Chennai Super Kings – two names which have become synonymous after all these years of the Indian Premier League. The CSK-skipper has been accepted by Chennai and is fondly known as Thala. The rapturous cheers for every Dhoni-movement on the field is reflective of his huge sway over the crowd. “It’s a big nickname that they have given me. It feels really special. I didn’t realize that it was part of the first CSK song. The way I got accepted and the whole of Tamil Nadu — don’t call my name, they call me ‘Thala’. It’s very nice and they have always supported not only me but the whole team,” Dhoni said.

The name #Thala is very special and I’m thankful to the fans for the love bestowed on me 🙏 pic.twitter.com/ZN9VTUe0vM Though many fans of Ajithkumar accepted Dhoni as “Thala” as he hails from completely different field, some fans irked on Dhoni being called as “Thala”. They expressed their disappointment through Social media. Check out some of their reactions here :

#Thala is a very powerful name down south because of Ajith sir.. pic.twitter.com/fopvxzTl4k

One and only #Thala #AjithKumar not for you @msdhoni 😅#HBDIconicThalaAJITH

Real #Thala is #Ajith not you dhoni pic.twitter.com/LW1jmLGYBf

One and only thala ajith
You guys go mind your business🤣💦

As both the personalities are leading a successful career in their respective fields, it would be much more healthier if both the icon’s fans gets united and support each other as they both are trying hard to entertain the people of Tamilnadu. What do you think on these comments ?? Let us know your views !!

Previous articleArya Stark Copied Our Jayam Ravi ?? Here’s What The Actor Has To say !!
Next articleStudent Killed By His Friends In The Name Of “Birthday Bumps”?? Horrific Video Goes Viral !!

Prominent Tamil actor Siddharth who is known for his works across the country, endorsed the tweet of Tamil nadu finance minister Dr. P.T. Thiaga...