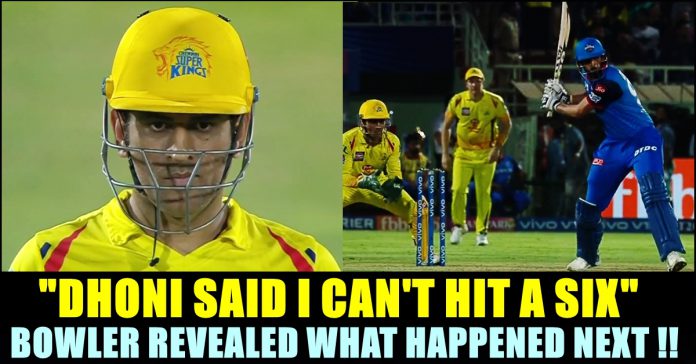 As the Lockdown 2.0 is progressing, people of country India are looking for ways to kill their loneliness. Cinema and sports personalities are appearing in social media live sessions to interact with their fans and followers to engage them and to get engaged. The recent one to join the fans through Instagram live is, Indian fast bowler Ishanth Sharma and the cricketer revealed few interesting and unknown incidents that took place on field. To our surprise, he revealed how MS Dhoni lost his cool during an IPL match that took place between Chennai Super kings and Delhi Capitals.

MS Dhoni loves outsmarting the opposition with his quick thinking, innovative field settings and clever bowling changes. But he also knows how to keep errant teammates in line without having to raise his voice in anger. Now, in this recent live session, Ishant has revealed an incident that happened in 2019 IPL.

Known for his calm and composed nature, MS Dhoni has gained a nickname “Mr.Cool” for keeping himself calm in the field, unlike other captains. But there are occasions where the ice head lost his temper as well. One such incident took place during 2019 IPL and Ishanth Sharma recalled the incident while giving an interview with Gaurav Kapoor for his youtube channel.

While Ishanth Sharma, a renowned pace bowler for Team India, came up to bat as the 11th batsman for his Delhi Capitals, Dhoni said that he can’t hit a six due to his inability. In a way of responding to this, Ishanth smashed Ravindra Jadeja for four, the very next ball. He went on to launch a maximum and turned his head towards Dhoni who looked very much irritated and was seen abusing Jadeja for his poor deliveries.

“Last year,In IPL, Mahi Bhai used to make fun of me saying that I can’t hit sixes, he said that I don’t have that power. Then came Jaddu with the ball and I smashed him for a four, followed by a six. Then I turned my head towards Mahi bhai to see his reaction who was seen abusing Jaddu” the cricketer said in the interaction.

Here’s the video of his batting performance :

The incident Ishant mentioned took place in the second qualifier of 2019 IPL. Ishant came in to crease with just 3 balls left and failed to score runs in his first ball. However, he managed to add 10 runs in the next two deliveries which helped his team to post a total of 147 runs. Chasing down the total, Chennai won the match comfortably with 6 wickets in hand in the 19th over. Shane Watson and Faf Du Plessis scores half centuries to take their team to the finals against Mumbai Indians. However, the team lost the finals by failing to score 2 runs in the last delivery of Malinga.

Actress Kangana Ranaut who is considered as India's one of the top most talented heroines, in a recent promotional event of one of her...

Asuran film of Dhanush and Vetri Maran has been running successfully in theatres for 100 long days as of today. The crew celebrated the...