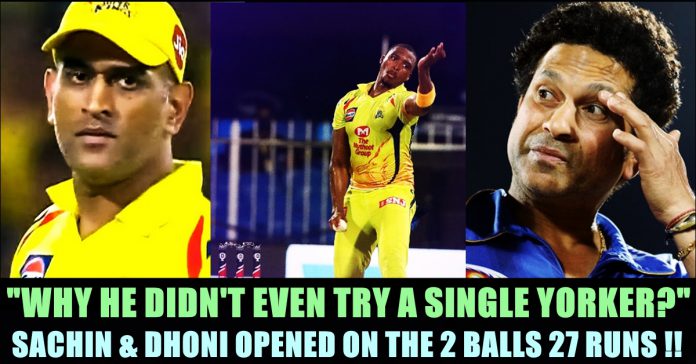 Rajasthan Royals clinched an easy victory against Chennai Super Kings on the fourth league match of IPL 13. The team which dominated CSK right from the initial overs of the game, never let Chennai in the hunt throughout the game. The poor bowling performance of the yellow team helped them to score a mammoth total of 216 in their first innings. Chennai managed to score 16 runs and miserably failed to chase the total despite of Dhoni’s 3 humongous sixes in the final over.

Young lad Sanju Samson demolished the spin attack of Chennai Super kings and scored 74 runs from just 32 balls with 9 sixes and 1 four. However, Chennai made a come back by restricting Rajasthan for 186 runs in 19 overs and Dhoni gave ball to Lungi Ngidi to bowl the final over. He was expected to restrict the final total within 200 runs whereas the South African cricketer gave way 30 runs and helped the blue team to post 216 runs on the board.

His over consisted four sixes with two balls and a wide. Talking about the loss, Captain Mahendra Singh Dhoni, in the post match presentation said that the team made a come back after the number of errors committed by the spinners by not bowling away from the batsman.

While talking about the final over, the Indian captain said “Without singling out anyone, what we could have done is that we could have avoided the no balls which is controllable. Even when you are under pressure, try not to give no balls. That’s controllable. You can’t control how the opposition batsman is batting but you can control yourself by avoiding no balls” said Dhoni. It is notable that Piyush Chawla also bowled a no ball which went to a maximum.

“I think that’s the one area we could have avoided. If we restricted them within 200, it would have been a very good game” he added. When he was asked why he didn’t come in to bat a little bit earlier, Dhoni said that he didn’t batted for a long time. “The 14 day quarantine doesn’t really help. Slowly trying to get into the tournament” he said. “Also at the same time we want to try a few different things like sending Sam or Jadeja up the order.” Dhoni added who felt that it is the right time of the tournament to experiment things.

Meanwhile, Sachin Tendulkar watched the entire match it seems. On seeing the final over of the first innings, the God of cricket questioned why Ngidi didn’t try a single yorker. “What a finish by Jofra Archer taking Rajasthan Royals to 216. Very surprised that Lungi Ngidi didn’t even try to bowl a single yorker in the last over. #CSKvsRR” his tweet read.

What a finish by @JofraArcher taking @rajasthanroyals to 216.
Very surprised that @NgidiLungi didn’t even try to bowl a single yorker in the last over. #CSKvsRR