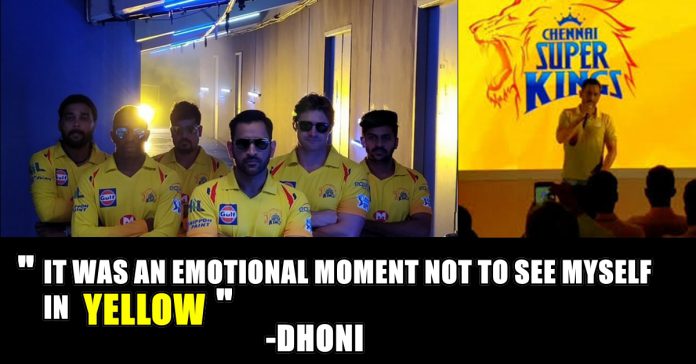 A man who is rarely seen letting his emotions get the better of him, Dhoni got quite emotional and almost broke into tears as he spoke about the return of Chennai Super Kings (CSK) to the Indian Premier League (IPL) this season. Chennai, one of the most successful sides in the IPL, were suspended for two years after being caught up in the sensational spot-fixing controversy.

Now after almost 2 years CSK are back in action under the leadership of Dhoni and the skipper failed to control his emotions and got choked up while addressing the audience at an event in Chennai. As the team and fans gear up for their highly-awaited return this year, Chennai’s mercurial captain somehow managed to hold back his tears as he took long pauses to settle himself down before suggesting we should forget the past and look ahead to the future.

“As I said it was, I knew I would play for the Pune team but the actual moment comes when you start walking with the team-sheet in your hand till that point of time its only practice and everything,” he said. “It was a very emotional moment…since I have started playing T20 cricket represented the Indian cricket team, Jharkhand team in few tournaments and CSK for eight years, so it was an emotional moment not to see myself in yellow,” Dhoni added.

“But at the same time as professionals, we have to move ahead and also not to prove to anyone but to prove a point to myself that I am making sure whatever I gave in for CSK, I am not leaving any inch that I am not giving for the Pune team,” he added.

Under Dhoni’s leadership, CSK won the title twice in 2010 and 2011 and finished runners-up in four editions.

Chennai Super Kings begins its campaign on April 7 at the Wankhede Stadium where they will take on the defenders Mumbai Indians.

Gopi who is popularly known as "Parithabangal" Gopi has now cleared air on a meme related to him which is doing rounds since the...