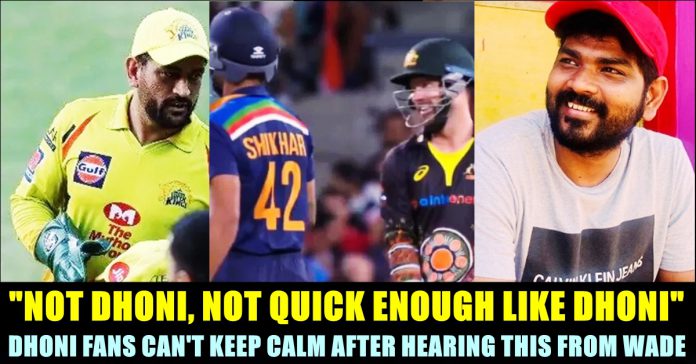 Dhoni Fans Can’t Keep Calm After Hearing This From Wade !!

Fans of former Indian captain Mahendra Singh Dhoni can’t keep calm after seeing Wade’s confession on his “stumping” skills not being on par with the Jharkhand born. Dhoni who announced his retirement from all forms of International cricket, is currently playing in the Indian Premier League, representing Chennai Super Kings.

In the second T20 between India and Australia, the impact created by the former captain on field was reflected as Mathew Wade of team Australia confessed that his wicket keeping skills not being on par with the abilities of Dhoni.

The incident took place when Wade failed to stump India’s opener Shikhar Dhawan, in the 9th over of India’s chase when Mitchell Swepson was bowling to the southpaw. At that time, Swepson delivered a wide, which was short and outside the off stump to which Dhawan went for a cut and missed it.

Wade, smartly waited for the foot to rise perhaps hoping to dismiss Dhawan like the way MS Dhoni had famously dismissed Bangladesh’s Sabbin Rahman during the 2016 T20 world cup. But Dhawan was quick to bring down his foot in time. Wade needed to be quicker there alike Dhoni to get Dhoni out.

“Not Dhoni, Not quick enough like Dhoni” Wade caught saying on the stump mic to which Dhawan responded “Yes”.

This video went insanely viral among the fans of Mahendra Singh Dhoni. Tamil filmmaker Vignesh Shivan who is known as an ardent fan of MS Dhoni, uploaded a meme as his story in his official Instagram account. the meme showed a popular template from the world famous series “Breaking Bad”.

Many other fans of the cricketer remembered the legendary cricketer who gave so much memories for his fans to cherish all these years. Check out some of their reactions below :

Wade about MSD in today's match.

Whether he presents or not forever a King 👑 @msdhoni

After Missing That Stumping "Wade" :
"Not Dhoni, not quick enough like Dhoni"#MSDhoni Best WK Ever In History Of Cricket 🤏🏻😎 @msdhoni pic.twitter.com/uV77I8r0cC

"Not Dhoni, not quick enough like Dhoni "- Wade to Dhawan after a missed stumping chance.
Living Legend @msdhoni 🙏 pic.twitter.com/QUKzErjuH7

#NotDhoni @msdhoni "Not dhoni""not quick enough like dhoni"
Forever he is the only man quick between the stumps….for is stumping …wade is really great… pic.twitter.com/tfOpEwvVpy

Previous articleFormer BIGG BOSS Contestant Slammed Vijay TV For Sanam’s Eviction !!
Next articleKamal Replied To Those Who Trolled Him As “Sanghi” !!

Saturday’s Bigg Boss Tamil episode was all about the lies being peddled in the house and how host Kamal Haasan tried to reveal the...

Prasanna Lara who is widely known as a cricket analyst, worked as an analyst for Indian Hockey team prior entering cricket and in a...