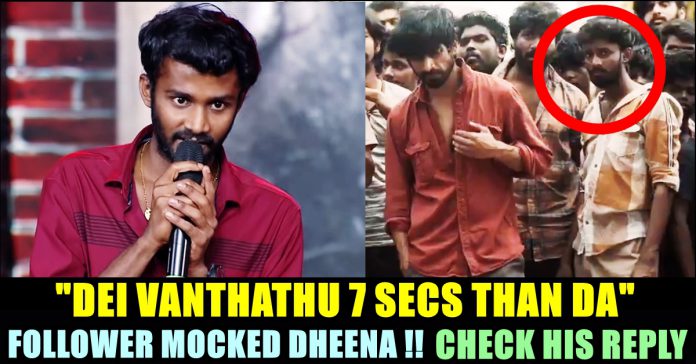 Dheena Replied To A Follower Who Mocked Him For His Role In “Master” !!

“Kalakapovathu Yaaru” fame Dheena who entered Tamil film industry by proving himself in the Television show, was acted in Vijay-Vijay Sethupathi starrer “Master”. He acted in the film as a juvenile who is involved in illegal activities. Recently, he uploaded a picture of himself with director Lokesh Kanagaraj, Arjun Das and others in his Instagram account. On seeing the post, an Instagram user mocked him for appearing in limited scenes. Dheena’s reply to the user went viral in social media platforms as he made him shut down for once and for all.

Ever since the film “Master” released in the theatres of Tamil nadu, trolls targeting the supporting actors of the film kept surfacing in the internet. Based on their limited screen time, users of social media platforms made memes to troll the actors. Actors Shanthanu, Deena, Andrea, Malavika Mohanan, Sanjeev became victims of the mindless trolls in social media platforms.

No matter what they say! 😎

25 crores + in less than 24 hours at the box office in Tamil Nadu 🔥#MasterTheBlaster #MasterPongal #Master pic.twitter.com/r1GQlC22z9

Dheena who played a prominent role in director Lokesh Kanagaraj’s “Kaithi”, got an opportunity to act in “Master” as well. Dheena played a role of one of the juveniles in the gang led by Arjun Das. He had combination scenes with actor Vijay towards the climax as well. Now, four days after the release of the film, Dheena uploaded a post in his official Instagram account.

Uploading a picture of himself with director Lokesh Kanagaraj, Lallu, Udayaraj and director Rathna kumar, Dheena wrote “Kaithi boys as kaithi in master..”

The post garnered 1 lakh likes in no time and one of a fan complimented Dheena for his role in the film. “Semma Acting bro nenga😍😍” the follower said in the comment section to which another follower mocked Dheena by saying that he appeared only for 7 seconds in the film. “Dei vanthathu 7 seconds thanda” he said in his comment.

Dheena who saw the comment, immediately came up with a reply saying that took 7 years for him to appear in the film for 7 seconds. He said that it is a big achievement for him in his life. The actor wrote “enaku athuvey periya vishayam brother antha padathula 7 secs varathuku enaku 7yrs achu”. in his reply.

As the user deleted his comment now, Check out the screenshot of Dheena’s reply here :

Check out the stories Dheena added after replying to the user :

Earlier, fans trolled actress Andrea for uploading a video of herself practicing Archery. Actor Shanthanu uploaded a tweet in his official Twitter account saying that it’s still an achievement to be part of such a magnanimous project. He said that it doesn’t matter if it is a singe scene or full movie and that he feels proud to be a part of such project. He also added the video of himself celebrating the first day first show of “Master” in Rohini theatres.