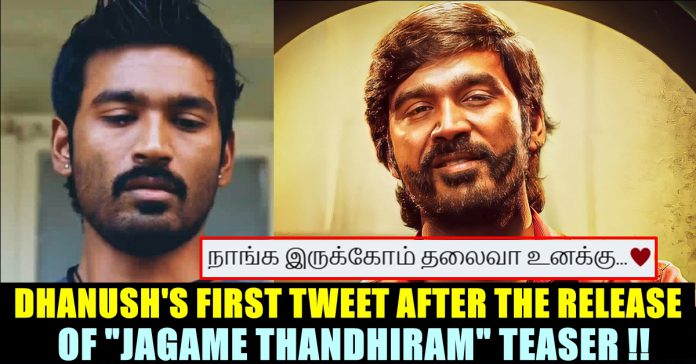 Actor Dhanush uploaded his first tweet after the release of “Jagame Thandhiram” teaser and the fans of the actor couldn’t keep calm as we could see them filling the comment section in no time with their reactions. He who avoided sharing the youtube link of his film’s teaser, uploaded a post celebrating the 6 million views of “Kandaa vara sollunga’ song.

The most awaited teaser of “Jagame Thanthiram” got released on youtube yesterday without prior announcement. Producer Sashi Kanth released the teaser in his official twitter account announcing that the film is going to be a direct Netflix release. Fans got very much impressed with the teaser but actor Dhanush who made the announcements of his upcoming films such as “Atrangi Re”, “Karnan” in his official twitter account, avoided sharing the teaser of “Jagame Thanthiram”. This left the fans extremely dejected who are expressing their emotions in social media platforms.

Meanwhile, on the same day, around 11 PM, Dhanush came up with a tweet celebrating the 6 million views of “Kandaa Vara sollunga” song which was released on youtube recently. “#karnan” his caption for the post read and he added the design exclusively made to celebrate the 6 million views.

On seeing this tweet, followers of the actor asked him to be strong and stretched their supportive hand. actor Mahendran replied writing “More power” whereas many other fans showered him their love.

Dhanush completely avoided sharing the teaser in his official twitter account as he wanted the film to get theatrical release. The last post he shared before Jagame Thandhiram teaser release was about the release announcement of his upcoming Bollywood flick “Atrangi Re”. He has also unfollowed the producer of “Jagame Thanthiram”, according to reports.

“I am hoping for the theatrical release of Jagame Thandiram like the theatre owners, exhibitors, distributors, cinema lovers and most of all my fans. Fingers crossed” Dhanush said in his tweet which was uploaded on 2nd of February.

The teaser of Jagame Thandhiram opened by revealing the character name of the lead and gave us a hint on the characterization of Dhanush who played “Suruli”. The man who hails from village seems to be a pro in making country bombs. His witty one liners and mere presence makes the people around him happy. But what happens when he visits abroad and starts making business with the real gangsters is what we have to wait for.

Previous article“Laughed Out Loud” – Ashwin Watched “Drishyam 2” & Recommended It To His Followers !! Lalettan Replied
Next article13 Year Old Zaara Replied To Haters Who Called Her As “Over Matured” !!

BJP politician H. Raja who is known for his controversial statements and public speeches, on Tuesday, uploaded a picture of a car in his...