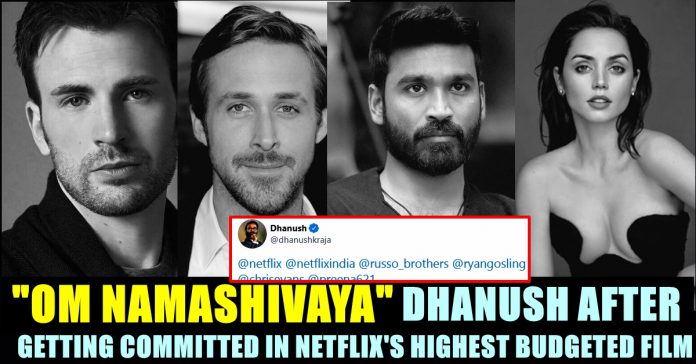 Dhanush Sets Internet On Fire By Joining The Cast Of “The Gray Man” !!

Dhanush is trending at the top in Internet since Thursday evening due to the announcement made by Netflix. The actor has joined the cast of “The Gray Man” Netflix’s highest budgeted film so far. The film which is going to be directed by Russo brothers of “Avengers” fame, has Chris Evans, Ryan Gosling and Ana de Armas in the lead roles along with Dhanush.

The film is reportedly based on Mark Greaney’s 2009 novel of the same name and revolves around freelance assassin and former CIA operative court Gentry (Going to be played by Ryan Gosling). It follows Gentry as he is hunted across the world by Llyod Hansen (Chris Evans), a former member of Gentry’s CIA team. The film is going to be made of a budget of 200 million US Dollars which is equal to Rs. 1470 crores of Indian currency.

Dhanush made his International debut through “The extra ordinary journey of Fakir” in 2018 and this will be his second International project. Wishes from all over the world is pouring for the 37 year old. Elated to announce that I will be joining the team of Netflix’s “The Gray Man” starring Ryan Gosling and Chris Evans, directed by The Russo Brothers (“Avengers”, “Captain America: Winter Soldier”). Looking forward to being a part of this wonderful action packed experience. My sincere thanks to my dearest fans from all over the world for all the love and support you have been showing me throughout these years. Love you all. Spread Love…! OM NAMASHIVAYA” wrote Dhanush in his recent tweet.

Check how fans and celebrities are reacting to the news :

crazyyyyy cool news to wake up to 😍🥰🥰🥰amazing @dhanushkraja sir. My bestest to you 😊 pic.twitter.com/cX3A4s0BaV

No hope or thoughts about the plot, but casting is super hot🥵🔥….. pic.twitter.com/p2xJ5IfmD2

Dhanush who is known for his acting skills, has won national award for acting in Vettri maaran’s “Aadukalam”. In his recent blockbuster “Asuran”, Dhanush played a role of a man in his late 40s. He also pulled of a college student role in “Enai Nokki Paayum Thotta”. The actor’s versatility has always impressed the fans of Tamil cinema and it is time for the world to witness it. He recently completed the shoot of “Karnan” and is shooting for a bollywood film named “Atrangi Re”. He is also expected to join hands with Karthik Naren soon and Pudhupettai 2, Vadachennai 2 are in cards as well.

Tamil nadu finance minister Palanivel Thiaga Rajan who has been grabbing headlines through his savage replies in Twitter and for making on point statements...