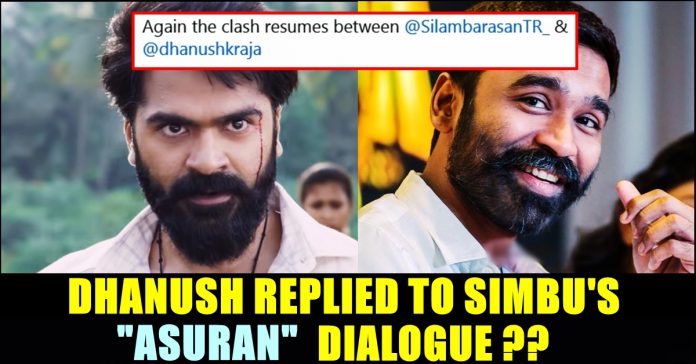 As soon as Dhanush changed his twitter bio into “ASURAN”, users of the micro blogging social media site started believing that the actor did it to give a fitting reply to Simbu who used the term in his film. It is very well known that Simbu and Dhanush were considered as rivals during the initial stage of their acting career. However, at one point, Simbu stopped acting in films whereas Dhanush acclaimed national level recognition. Now, as the latter is marching towards Hollywood, former made his come back with Eeswaran and used “Asuran” as a punch dialogue in the film. It is the title of the most recent film of Dhanush and the actor, now changed his Twitter bio as “Asuran” which caused reactions in the social media platforms.

Simbu who was last seen in “Vantha Rajava Thaan Varuven”, made his come back through “Eeswaran” which was directed by Suseenthran of “Naan Mahaan Alla” fame. Towards the end of the film’s trailer which was released on youtube, Simbu could be seen uttering “If you are an “Asuran” who came to destroy, I am “Eeswaran”, the saviour”

This trailer received various kind of reactions from the fans regarding the dialogue in the end. Many fans felt that Simbu is taking a sly dig at Dhanush by mentioning “Asuran”. Now, days after the film’s release, Dhanush changed his bio to ASURAN/Actor.

As soon as he changed the bio, reactions emerged saying that Dhanush did it to give a fitting reply to “Eeswaran trailer”. Simbu fans also posting tweets countering the fans of actor Dhanush.

Ohhh, nice!! I guess I know why, people misunderstood Asurakulam as destroyers and he tried to change it with Asuran but his so called "competitor" had to mess it up with the dialogue in Eeswaran, good move by Dhanush! 😊

Again the clash resumes between @SilambarasanTR_ & @dhanushkraja #Eeswaran VS #Asuran 🔥

SIMBU: I AM NOT THE ASURAN I AM EESWARAN
DHANUSH: SHALL WE START THE WAR AGAIN🔥
AND NOW ITS TIME FOR OUR ASURAN TO TAKE CHARGE 💥🤟
VAA TALIVA🙏#JagameThandhiram #Karnan @dhanushkraja

Thought #D is a sensible actor ! He don't need to do that ! He is already good in his own way,Then why is that? Is that anything to do with the movie ? His bio#Asuran #Dhanush

It is also believed that Dhanush’s name in his upcoming film “Naane Varuven” of Selvaraghavan is going top appear with the tag “ASURAN”. Comment your views on these reactions !!