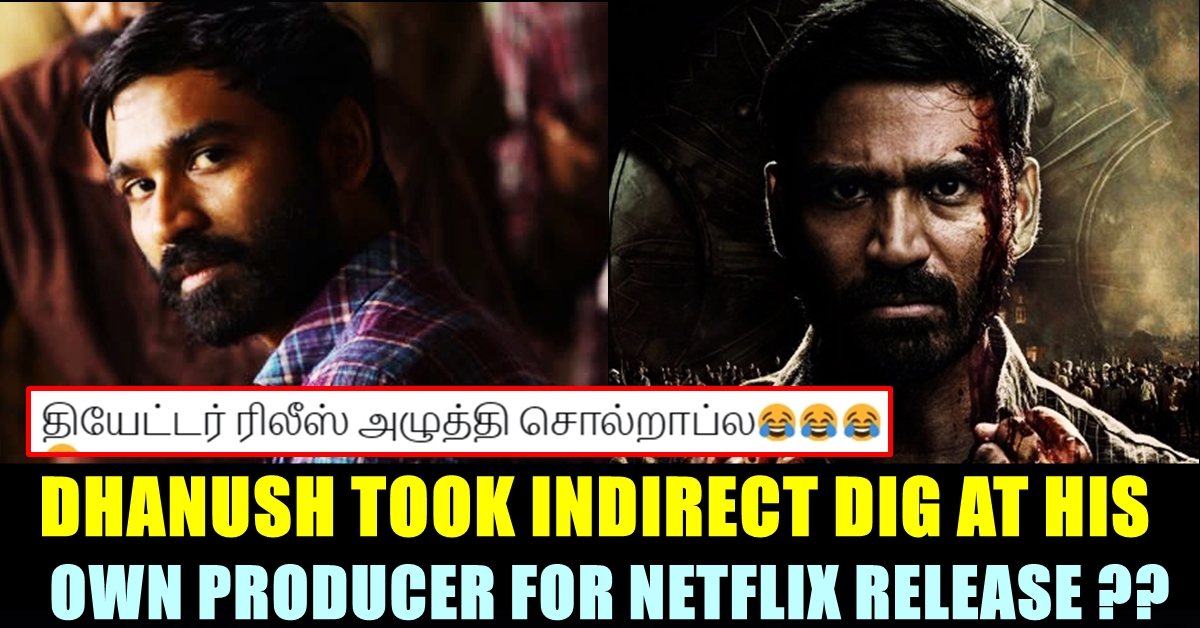 Dhanush’s tweet announcing the release details of his upcoming Bollywood film “Atrangi Re”, gained a special attention from his fans as the actor stressed the terms “Theatrical release” by writing it in capital letters. Many fans felt that the actor is taking an indirect dig at his “Jagame Thandhiram” producer Sashi. While announcing the release details of his “Karnan”, the actor did the same and even expressed his wish of releasing “JT” in theatres through a tweet.

Producer Sashi Kanth who is known for producing successful films such as Tamizh Padam, Kaaviya Thalaivan, Irudhi Suttru, Vikram Vedha through his Y not studios, has bankrolled “Jagame Thandhiram” as well. Earlier, The film producer confirmed that the film is not going to stream in OTT platform while replying to one of a twitter user but now several reports emerged saying that the film is going to directly release in “Netflix” online streaming platform.

A popular online portal named Lets OTT Global said that an agreement has been singed, sealed and confirmed between the makers of “Jagame Thandhiram” and Netflix India. Lets OTT also reported that Netflix offered a huge amount for “Jagame Thanthiram” and the makers accepted it as they didn’t want to miss it.

Actor Dhanush who played the lead in “Jagame Thandhiram”, congratulated Vijay’s “Master” for going with Theatrical release. He wrote “It’s great news for cinema lovers and I hope watching movies with friends and family helps to thrive the theatre culture once again. Nothing like a theatre experience. Please take all the safety precautions and watch the film in theatres.” when the announcement arrived and JT’s release on online platform is a shock for the fans.

After the news on Jagame Thandhiram’s online release started doing rounds in social media, Dhanush himself came up with a tweet expressing his wish of releasing the film in theatres. “I am hoping for the theatrical release of Jagame Thandiram like the theatre owners, exhibitors, distributors, cinema lovers and most of all my fans.” Dhanush’s tweet which was uploaded on 2nd of February read.

Now, announcing about the release of “Atrangi Re”, the actor wrote “6th august 2021 @aanandlrai and @arrahman’s #AtrangiRe THEATRICAL RELEASE”

On seeing “Theatrical release” in capital letters, followers of the actor assumed that he taking indirect dig at the producer of “Jagame Thanthiram”. Check out some of their reactions below :

It is notable that the actor did the same while announcing the release details of his upcoming film “Karnan” which is directed by “Pariyerum Perumaal” fame Maari selvaraj.