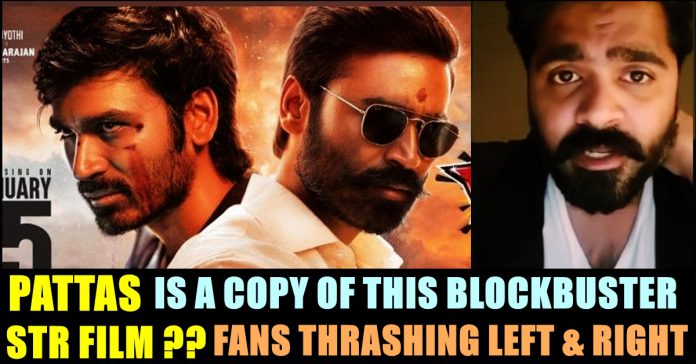 Dhanush’s “Pattas” film released on theatres on Pongal day and is running successfully. After delivering a critically acclaimed “Asuran”, Dhanush came up with a commercial entertainer to entertain his audience. Directed by R. S. Durai Senthilkumar, “Pattas” was produced by Sathya Jyothi Films. Along with Dhanush, the film has Sneha, Mehreen Pirzada in the lead roles and Naveen Chandra played as the antagonist. The film features music composed by Vivek-Mervin. It marks the second collaboration between Dhanush and director Durai Senthilkumar after Kodi.

The film is based on an ancient martial arts called as Adi Murai which was practiced in Tamilnad. According to a source, Dhanush and Sneha trained the martial arts before the start of the shooting. Pattas has Dhanush in dual roles for the second time after Kodi. The protagonist played the roles of father and son. Now, after the release of the film, reviews are pouring from all the directions of the Internet.

When the fans of the actor are praising the film, general audience provided a mixed reviews for the film after watching it. To our surprise, a set of fans has alleged that the plot of the film has been copied from a 2008 released film “Silambattam”. The film had Silambarasan in the lead role who was considered as a rival to Dhanush at one point of their career.

Silambattam which has Simbu in dual roles as father and son, also has the plot of the son revenging the antagonist who killed his father. The film had Sneha as the pair to the father Simbu as in “Pattas”. Apart from Simbu and Sneha, it featured Sana Khan, Prabhu and Kishore in the lead roles. The film became a commercial hit at the time of its release and received mixed reviews from the audience.

Audience who are coming out theatre after watching the film “Pattas”, can be seen addressing the similarities it has with “Silambattam”. “I see this film as an extended version Silambattam. Other than that, nothing made an impact” said of a fan.

The videos are being shared widely by the fans of Simbu in social media platforms. Check out some of their reactions below :

Making it clear on comparison with #Silambattam film 🙏

Only the plot looks similar in both the films but…
Silambattam >>>>>>>>> #Pattas
.#MAANAADU #str pic.twitter.com/8CokImueHz

#Pattas (2.5/5) : The film looks very similar to #Silambattam film where father character is quite strong with an emotional end & son takes the revenge !! @dhanushkraja does it well till the end.

2nd half could have been better. A weak climax & a weak villain! #PattasReview

#Pattas -(2.5/5)
The film has a same narrative like so many masala entertainers in Tamil. But it has striking resemblance of Simbu's Silambattam (may be Sneha factor and father -son relationship). The film could have been much better.

What do you think on these reactions from audience after watching “Pattas”?? Comment your views below !!

Since the morning of Sunday, several social media posts, screen shots, Instagram stories, write ups has been surfacing in Internet, calling out the faculties...

Many lauded the performance of CSK against Kolkata Knight Riders in social media where some expressed their disappointment as the entire match went one...