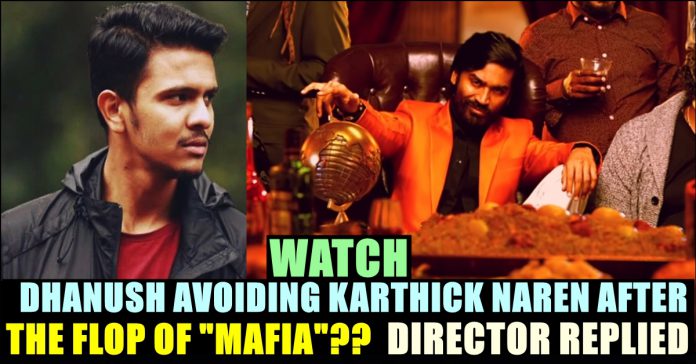 Actor Dhanush has a very interesting line up ahead of him after his blockbuster film “Asuran”. The national award winning actor is currently busy in the shooting of Maari Selvaraj’s “Karnan”. Apart from that project, his film with Karthick Subbaraj which is titled as “Jagame Thanthiram” is all set to hit screens on May month. He is also making a come back in Bollywood through “Atrangi Re” in which he is going to share screen space with Akshay Kumar. Danush’s blood brother Selvaraghavan made an important announcement on the sequel of Pudhupettai as well. It is notable that the “Aadukalam” actor committed in an untitled project with “Ratchasan” fame Ramkumar. “Vadachennai 2” with Vettri Maaran is also on cards and the most expected project among the upcoming films of Dhanush is the one with director Karthick Naren.

Tentatively titled as “D43” the announcement was official made by the actor himself through his official twitter account. The film is going to be produced by Sathyajothi films and G.V Prakash joined the crew as music composer. Director Karthick Naren is just two films old and has already won many hearts of the cinema fans as his first film exceeded its expectations. Though he is struggling to release his second film “Naragasooran” due to financial issues, the filmmaker successfully released his second film “Mafia” in which he casted Arun Vijay and Prasanna as protagonist and antagonist respectively.

The film which released with highest expectation, miserably failed to impress the audience. Critics also gave mixed reviews for the film which resulted in negative word of mouth. However, many fans lauded the film for the way it is made and for not being a typical masala Tamil film. Now, film journalists of Valaipechu youtube channel made an important statement regarding the next film of Karthick Naren and Dhanush.

They said that Dhanush is delaying to hear the script from Karthick Naren after seeing the result of Mafia. “Dhanush committed his upcoming film with Karthick Naren due to the pre release buzz his film “Mafia” created. Now after seeing the result, he is delaying to hear the script. Maybe the Pudhupettai 2 announcement of Selvaraghavan made him to delay” they said in their youtube channel.

However, the 25 year old filmmaker has answered to this rumour while replying to one of his follower in Instagram. To the fan who asked how his next project with Dhnaush is going, Karthick said that it is going on full swing. Check out the screenshot of his answer below :

Followed by this he answered to a fan who asked him to tell the best philosophy of his life, in a way of replying to those who are wanting him to fail.

The filmmaker also revealed the names of the writers he is working with for his upcoming film D43 :

Comment your views on these replies of Karthick Naren and the news reported by Valaipechu team !!

These Celebrities Already Started Supporting Jithan Ramesh For This Reason !!

On seeing the very first episode of Bigg Boss season 4, an number of celebrities started supporting Jithan Ramesh, an actor by profession. Being...