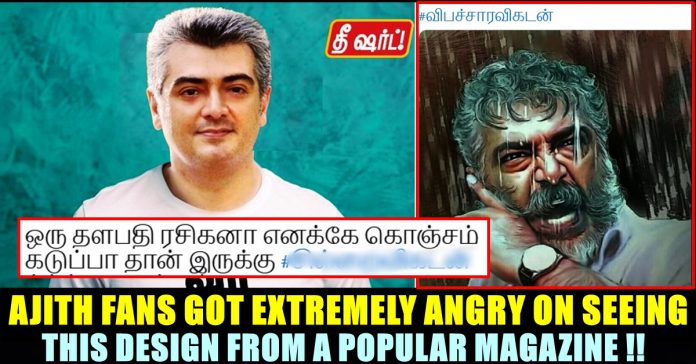 A design made by a popular tamil magazine made many fans of actor Ajith kumar is a dejected state. The actor, on Thursday released a press note asking public not to believe in frauds who are identifying themselves as the representative of himself. He said that Suresh Chandra is the only representative of him. The press release became a trending topic in social media. Now, a design made by Ananda Vikatan having Ajith kumar created ruckus among the fans of the actor.

Ajith Kumar is an Indian film actor who works predominantly in Tamil cinema. In addition to his acting, he is also a motor car racer and participated in the MRF Racing series in Chennai. He began his career with a small role in the 1990 Tamil film En Veedu En Kanavar. Singer S. P. Balasubrahmanyam introduced Ajith to Tamil film industry by referring him to play lead role in Amaravathi.

Actor Ajith Kumar who has huge fan base in Tamil nadu despite of his very limited public appearance, always insisted his fans to look after his family instead of spending time and money on worshipping him.

As we all know Ajith is one of the toppest actors in Kollywood industry who avoids attending public events and promotional functions. Being one of the leading actors of Kollywood, actor Ajithkumar enjoys a huge fan base in Tamilnadu. Despite of getting a humongous amount of love from his fans, Ajith refused to have fan clubs and dismantled it few years ago as he wants his fans to look after their families. This only increased the love of fans for him as they started admiring him more for his attributes.

Now, in a way of mocking Ajith kumar for not raising voice for public issues like Suriya and Vijay, Anandha Vikatan made a design in which his T-shirt said “Veliya Varamaten Poda” (I won’t come out, get lost). The T-shirt is an imitation of recent trending T-shirt “Hindi Theriyathu Poda”.

Fans of the actor got extremely disappointed on seeing this post from the legendary magazine. As a result of this, a hashtag “விபச்சாரவிகடன்” is trending in the micro blogging social media site caused by the fans of actor Ajith Kumar.

Check out some of the tweets under the hashtag :

Spoiling Thala Name by getting the money from Vijay 💯 .. Such a cheap activity @AnandaVikatan#விபச்சாரவிகடன்

Comment your views on this design made by Vikatan and the reactions from the fans of actor Ajith Kumar !!