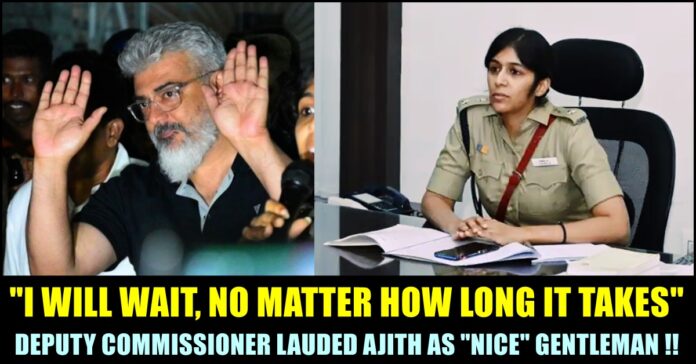 Trichy Deputy Commissioner Sridevi who organized the crowd that came to witness Ajith kumar who reached the district to participate in the 47th Tamil nadu rifle shooting championship. Due to the unexpected gathering of crowd, The local police had to be involved to handle the crowd as Ajith could not exit the venue to reach the airport for his flight back to Chennai. While speaking to media about Ajith kumar’s approach towards the situation, deputy commissioner Sridevi said that the actor is a nice gentleman and was keen on causing no harm to anyone.

After completing the preliminary rounds in Coimbatore, Ajith arrived in Trichy on Wednesday for the remaining leg of the competition. Pictures and Videos from the venue have surfaced on social media. It is notable that Ajith had won six medals last year in the Tamil nadu state shooting championship.

One of the videos showed the actor waving his hands at his fans and greeting them with folded hands. Videos also showed deputy commissioner Sridevi instructing the crowd that assembled to see Ajith and asking them to behave appropriately, when the actor steps out. She was seen telling them to see him and allow him to leave the place peacefully as he has to go to the airport.

Now, in an interaction with a news portal, Deputy commissioner Sridevi IPS lauded Ajith kumar for the way he co-operated to handle the crowd. “Fans cooperated in a good manner. I told them Ajith sir is busy right now and asked them not to surpass the rope which was tied to prevent them from entering the premises and they followed the same” Sri Devi IPS said to the media. “I asked them whether they would leave right after seeing him” and they confirmed the same immediately.

“I conveyed the same to Ajith sir and he came out to see his fans. 5 minutes after seeing him, people started leaving the place. It ended up peacefully only because of fans. They behaved with dignity as per their promise. That is the reason why the gathering ended in a peaceful way. They got satisfied after seeing Ajith kumar” the official said.

“Few didn’t leave. That’s natural among public while seeing a Superstar actor. But no one caused any problem” she further said. “There was no information about Ajith kumar’s arrival. When I inquired, they said that he is leaving immediately after reaching. I got the information only when the crowd went beyond control. He is a huge star and crowd gathering for him is natural. I would have tightened the security if they informed me earlier” the Police officer said.

Police speaking to the crowd which has come to see Ajith in Trichy..#PeoplesHeroAJITHKUMAR #AjithKumar #Thala pic.twitter.com/jkD2aSjynk

“The premises was filled with glass doors and the sutuation would havegot worse if the crowd lost control. A huge problem could have caused due to that but the crowd didn’t behave that way. They were genuine. They watched him silently and let. Ajith sir also greeted them twice and sent them in a nice way”

“No problem should occur. You instruct me, I would act accordingly. I can even wait. I don’t have any problem in it” said Ajithkumar to Sridevi IPS to send back the crowd without any calamity. “He kept repeating those words” said the Police officer. “He gave full co-operation to Police” she further said and termed the actor as a “nice gentle man”. Ajith kumar reportedly thanked each and every police officers including constables, says the report.

The Police officer thanked the fans for their co-operation on behalf of Trichy Police and said that there is no need to file a case. “Family and children came in large number. I struggled a bit as the mic didn’t work but they understood me and co-operated well” Deputy commissioner concluded.

Paari Saalan , a social media influencer who is prominently known for his controversial speeches in most of the leading Youtube Channels. He will...

JUST IN : “Kaithi” Villain Replacing This Top Actor In “Thalapathy 64” !!

A sum of talented and high profile actors including Andrea, Shanthanu, Vijay Sethupathi, Antony Varghese has made it to the cast of Thalapathy Vijay's...