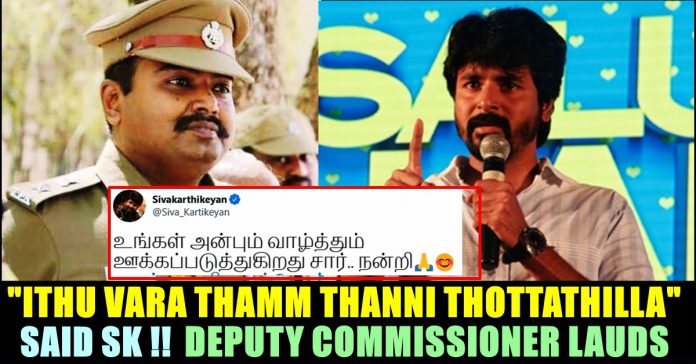 Sivakarthikeyan , an actor in Kollywood film industry is an inspiration to enormous number of Tamil youngsters today. The path he came through to become one of the leading actors in Kollywood made many to follow him. Many of the actor’s fans are seeing him as their representation and he who was just a TV anchor 8 years ago, now holding a huge responsibility on his shoulders as millions of kids and teens are following him.

Now, a video clipping of the actor’s speech in a public event got surfaced in twitter through a user. He who seems to be an ardent fan of the “Seemaraja” actor, shared a video of him in which he can be seen interacting with his fans. “I want to say only two things. I never felt prouder in my life, than being a follower of those two things. Till now, I never smoked a cigarette or consumed liquor in my life. My friends are the only reason behind that. They never encouraged me to drink or smoke. Don’t spoil your health by spending your own money or with the hard earned money of your parents. This is an advice and it will taste bitter. The alcohol you consume also would taste bitter, ain’t it ?” Sivakarthikeyan says to his fans in the video.

Sharing the video, the young follower said that he never touched them and won’t do it in the future as well.

On seeing this video, Mr. Arjun Saravanan who serves as a Deputy commissioner of Police in Tirunelveli City, asked the young generation to follow his words. He who shared the video, wrote “If you are the one who follows what your favorite heroes are doing on screen, follow this too. No friend would call you to consume alcohol or to drink cigarette. Walk out of their friendship if anyone calls you for that. He is trying to kill you” in his tweet and thanked Sivakarthikeyan for creating awareness.

Replying to his tweet, Sivakarthikeyan wrote “Well said sir..thank u”

“Your emotional deeds to direct young generation in a good path should continue. Love and Thanks” Arjun Saravanan replied. “Your love and blessings encourages me to do more Sir . . Thank You” Siva replied back.

This conversation from actor Sivakarthikeyan and Deputy Commissioner Arjun went viral among the twitter users who are appreciating both of them for joining hands for a good cause. On the work front, Sivakarthikeyan is all set to appear in Doctor, Ayalaan post lockdown. He was last seen in “Hero” which is a message to parents on letting their children do what they love.