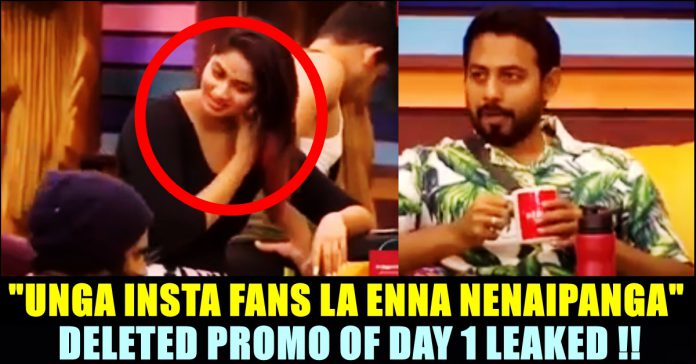 Vijay Television uploaded the three promos for the first day of BIGG BOSS season 4. In the first promo, we saw the 15 contestants dancing for the morning song “Vaathi coming”. Contestants were seen happy while performing dance for the Vijay-starrer son.

In the next promo, we saw Sanam Shetty blaming Shivani Narayanan for deliberately isolating herself from other contestants. She could be seen saying that the 19 year old actress’s immaturity and lack of work experience is the reason behind it. Suresh Chakravarthy also questioned Shivani after she said that it would take some time for her to mingle with strangers.

The third promo saw the contestants playing popular “Tik Tik Yaarathu” game within themselves. It showed “Aranthangi” Nisha falling down while running from being caught.

Before making the third promo live, the channel management uploaded another promo and immediately deleted it for unknown reasons. Very few followers who witnessed the promo, said that they saw the video in the comment section of the third promo.

Youtubers went one step ahead and captured the video to upload it in their channel. The promo shows Balaji suggesting Shivani to be herself. “It’s a good thing, you be yourself” he says to Shivani to which she replies “Yes”. Som Shekar, further asks “Be happy Shivani, you have many fans in Instagram, right ?? What would they think now ??”

Actor Aari of “Maaya” fame asks Shivani what’s the purpose of her posts in Instagram.

However, the promo got deleted in the channel’s official social media handles for unknown reasons. Shivani Narayanan, the young Internet sensation who is making youngsters go gaga through her ultra glamorous photoshoots, is currently enjoying 21 lakh plus followers in Instagram.

Fan Tattooed Actress Amritha’s Name In His Hand !! Check How The Actress Reacted

Actress Amritha Aiyer reacted to a video of one her fans who tattooed her full name in his forehand. She who got emotional, thanked...