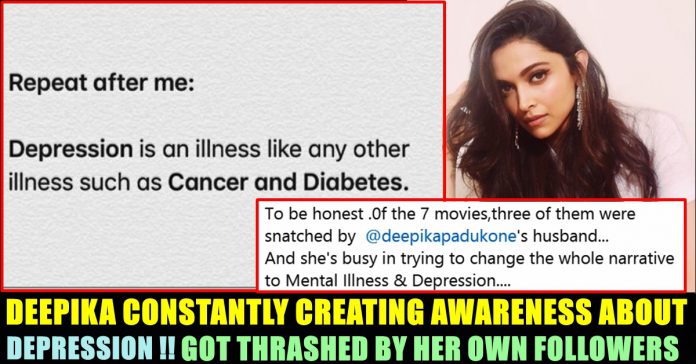 Almost all the stars of Indian film industry offered their condolences the family of Sushant Singh Rajput who killed himself on 14th of June in his residence in Mumbai. Not only cinema celebrities, many other influential personalities including cricket players and politicians came forward to express their sorrow on the unexpected decision made by the young actor. Starting from Amitabh Bhachchan to Salman Khan, Shah Rukh Khan, Priyanka Chopra and several other colleagues of the actor posted tweets along with the public regarding the demise of the 34 year old.

Unlike others who posted tweets on that day, actress Deepika Padukone who is considered as one of the leading actress of the Bollywood film industry, is constantly creating awareness regarding depression. On 14th of June, she said that she herself went through mental illness, asked people to talk, communicate, Express and seek help. You are not alone. We are in this together. And most importantly, there is hope” she wrote in her post

Followed by this, Deepika constantly uploading posts regarding depression. On 15th of June, the actress uploaded a post writing “Repeat after me : Depression is an illness”.

On 16th, her post said “Repeat after me : Depression is a form of mental illness”

“Repeat after me : Depression is an illness like any other illness” read her post which was uploaded on 17th.

However, these posts from the actress didn’t go well with the majority number of followers in Twitter. Many of them disagreed with what Deepika Padukone is preaching and said Nepotism in Bollywood killed Sushant Singh Rajput, not depression. Few twitter users went one step ahead and accused that Deepika’s husband Ranveer grabbed Sushant’s film opportunities. Few even asked why Deepika hasn’t posted any condolence message for Sushant till now.

Can you fucking stop this shit !!
You are using Sushants death as some kind of opportunity to publicize your foundation !!

Instead of doing this ask your industry friends to change their preferences while casting actors. https://t.co/QYXCyNOPEL

Repeat after me:
Hypocrisy is on its peak.. In the bollywood film industry.. https://t.co/yeK2GOvh4g

To be honest .0f the 7 movies,three of them were snatched by @deepikapadukone's husband…
And she's busy in trying to change the whole narrative to Mental Illness & Depression….
Waah #deepikapadukone Waah…
Once upon a time ,you were my favorite…lekin ab nahi.kbhi nhi…

Repeat After Me,#Nepotism is Cancer to Bollywood

Depression is not an illness .#nepotisminbollywood is an illness which killed Sushant .

Repeat after me 7 movies were taken from #ShushantSinghRajput under @yrf pressure and given to ranveer singh that's why she is saying he died of depression but in reality it's well planned murder.

Repeat After Me: You are One of the Enemy of SSR

Depression is not illness it's many people targeting one person to end his life 😒, that's reality i face daily.

Mam y are u speaking d pharma language? Pharma companies profit in billions with their anti depressant pills in USA, u want them to do d same here? Diabetes is a metabolic disease, cancer is abnormal growth of cells, depression is mismanagement of thoughts. How r they same?

Comment your views on these tweets posted by Deepika !!

Former Pakistani star batsman Mohammad Hafeez came up with a tweet extending his support to Indian youngster Arshdeep Singh who dropped a catch at...

VJ Ramya who is known for hosting shows in Vijay TV, made her silver screen debut through director Rathna kumar's "Aadai". Now she...