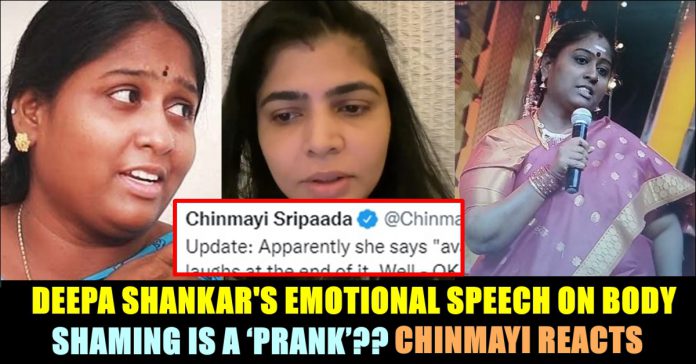 Indian playback singer, Chinmayi Sripada Twitted about the body-shaming video of Deepa Shankar on the 2nd September of 2021. The Cook With Comali fame Deepa Shankar’s video of body shaming is recently going viral among the netizens.

34-year old Deepa Shankar is a famous Actress and Television Artist of South India. She is popular by the Star Vijay tv hit show ‘Cook With Comali’. She also performed a supporting role in many movies and shows. She participated in the show, Mr & Mrs Chinnathirai with her husband Shankar. She also appeared on Vijay tv’s fun show ‘Comedy Raja Kalakkal Rani.’

Though it was a prank, actress Deepa Shankar’s words were very true which reached out to many people. Body shaming is the act of deriding or mocking a person’s physical appearance. Women are mostly targeted for body shaming which is not at all an adorable thing to do.

Chinmayi Sripada is an Indian playback singer, working mainly for the South Indian film industry. She is also a voice actor, television presenter and radio jockey. Chinmayi as of date has to her credit over 1,000 songs in eight different languages.

In the Twitter post, Chinmayi expressed her appreciation for Deepa Shankar’s body-shaming speech. And also mentioned that it is shameful that body-shaming still exists even in this modernised era.  The Twitter post read as, “Saw Deepa Shankar from Cook With Comali speak up on body shaming ‘comedy’ on Vijay TV. AWESOME! Power to her. Shameful that in 2021, it needs to be spelt out that skin colour shaming / body shaming is terrible. BTW could we also please stop making such ‘jokes’ on  Yogi Babu?”

Saw Deepa Shankar from Cook With Comali speak up on body shaming 'comedy' on Vijay TV. AWESOME! Power to her.
Shameful that in 2021, it needs to be spelt out that skin colour shaming / body shaming is terrible.

BTW could we also please stop making such 'jokes' on Yogi Babu?

After an hour, she again posted about the video being a prank. The post read as, “Update: Apparently she says “avanga solla sonnaanga naan sollitten” and laughs at the end of it. Well – OK whatever.”

Update: Apparently she says "avanga solla sonnaanga naan sollitten" and laughs at the end of it. Well – OK whatever.

Check below for the reactions of netizens for the Twiter post.

That's what I replied
They say everything and say IT'S A PRANK
They use the saying in THE PROMO.
During the telecast of the programme they say IT'S A PRANK.
AND IT IS NOT NEW EITHER

Naa dhaan solrene dialogues laam fixed nu.
Happy you spoke what my mind voice was.
Thanks and Respect.

There was a time when d creative department in Vijay TV was really creative & identified d real talents and came up vth novel idea. Now, most of their programs involve body shaming, & d women anchors are trolled & insulted in d name of comedy. The channel really needs a revamp.

Correct!! And it's with the acceptance of anchors and co artists only it happens. Humour took a different meaning is the hard truth!!

Previous articlePrashanth Reacts To The Trolls Made On His Recent Tweet!!
Next articleHigh Court Judge’s Statements On Cow Inhaling & Exhaling Oxygen Goes Viral!

What started as a fun talk, ended up in murder and shook the entire state. We have seen fights between actors fans in social...