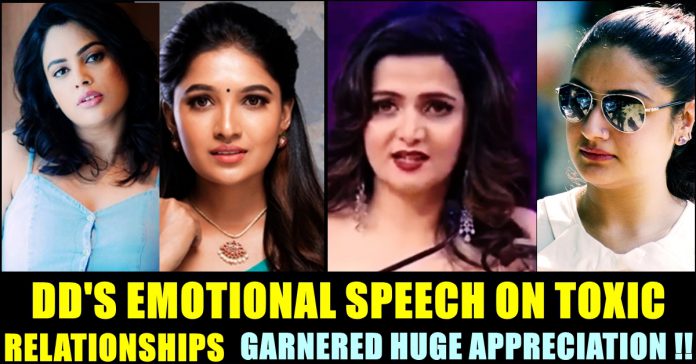 Popular anchor DD Neelankandan’s relationship advice to men and women through an event conducted by Vijay Television management has impressed a number of celebrities and many of the users of Instagram. She asked people to give up on relationships if it makes them feel toxic and suggested them not to worry about the opinions of people.

DD Neelakandan who has a 20 years of experience in TV industry has appeared in few films such as “Power Paandi”, “Whistle”, “Nala Dhamayanthi” etc. She also acted in Gautham Vasudev Menon’s “Dhruva Nakshathram” which is expected to release soon. Known for hosting several shows in Vijay Television, she is currently enjoying 2 million followers in the photo/video posting social media platform.

In a recent award function that got conducted by the management of Vijay Television, DD who hosted the show, talked her heart out and shared a particular video clipping in her official Instagram account. “Be it a girl or boy, if you realized that you have picked a wrong object, drop it without a second thought. Don’t hold on to that object thinking that people would throw shades at you. It will cost your life” DD said.

The speech of the actress is a reference to the demise of VJ Chithra, a serial actress who allegedly killed herself after involving in a romantic relationship with a man named Hemanth. He got arrested by the police and the parents of the actress accused Hemanth of killing Chithra.

“No people would care to talk about your choice of dropping the object after two days. I request everyone to leave the object you picked as soon as realizing that it is a wrong one” the TV anchor said in her speech amidst the applause of the auditorium.

She received huge accolades for her motivational speech from the audience and shared the video in her official Instagram account with a caption saying “The amount of LOVE & RESPECT I got for this is unbelievable, Romba nandri 🙏,I meant it girls n boys , if u don’t like where u are MOVE ,at any age MOVE, the world is BIG💪 , I’m hardly there on TV , but the LOVE I get when I’m there makes me humble n THANKFUL.. Thnks for the thousands of shares❤️”

Actresses Vaani Bhojan, Nanditha Shwetha expressed their admiration towards the speech of DD through Instagram. “Lovely words by both the anchors” said Nandithaa and Vani Bhojan dropped a heart in the comment section of the actress’s post. Ace actress Sonia Aggarwal who is known for her stint in Selvaraghavan films liked DD’s post as well.